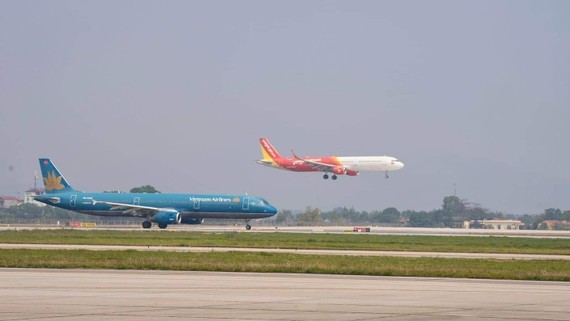 Vietnam adjusts flight routes after China's establishment of 6 temporary danger zones
Following the announcement of China to establish six danger zones related to the Taipei, Shanghai, and Manila flight information zones, CAAV requested Vietnam Airlines, Vietjet, Bamboo, Pacific, and Vietnam Flight Management Corporation (VATM) to formulate a plan to adjust flight routes to ensure safety.
The CAAV said that the Aviation Information Center - Vietnam Flight Management Corporation had reported on China's release of a telegram establishing six temporary dangerous areas. These danger zones are related to the Taipei, Shanghai, and Manila flight notification zones from 4 a.m on August 4 to 4 a.m. on August 7 (international time).
At the same time, Taiwan (China) has also released a telegram on the management of air traffic at the boundary of the Taipei flight information area.
Under the telegram, all aircraft are prohibited from entering these airspaces for safety reasons. It is expected that many flights to and from Northeast Asia (Taiwan (China), South Korea, Japan) and the US will be affected in the coming days.
In order to ensure absolute safety for flight operations to, from and through the flight information zones of Taipei, Shanghai, and Manila, the CAAV requires airlines to closely monitor and continuously update Chinese and Taiwanese sides’ announcement of establishments of temporary danger areas as well as not fly into these temporary hazardous areas.
Airlines need to base themselves on the operation plan and choose alternative routes to ensure that their aircraft stay away from these areas, and do not choose alternate airports which are located near the affected airspace.
In case airlines must cancel or delay the flights, they ought to have timely explanations to ask for sympathy from passengers for this unexpected situation.
Immediately after the CAAV issued the guideline, airlines have adjusted their flight plans with routes to Northeast Asia including Japan, Korea, and Taiwan (China).
Vietjet said that it is expected to have 82 flights affected during this time.