Heavy rain has caused transport problems across the central area and damaged Vinh-Dong Hoi railway section in the central provinces of Nghe An and Quang Binh. Around 5 km of railway tracks in Quang Binh has been submerged into water, leading closure of railway sections of Le Son-Minh Le, Ngan Son-Tho Loc, My Duc-Phu Hoa and Dong Chuoi-Kim Lu.
The company decided to cancel trains from Hanoi, including SE1 and SE3 on October 19 and SE7 on October 20. However, these trains connecting HCMC and Hue City have been operated normally.
150 passengers of the train No.SE8 that run from HCMC on October 18 to Dong Hoi in the early morning of October 19 have been stranded at Dong Hoi Station.

The firm has not yet carried travelers by cars because roads get flooded with water. The transport sector has also warned vehicles not to drive in flooded streets. 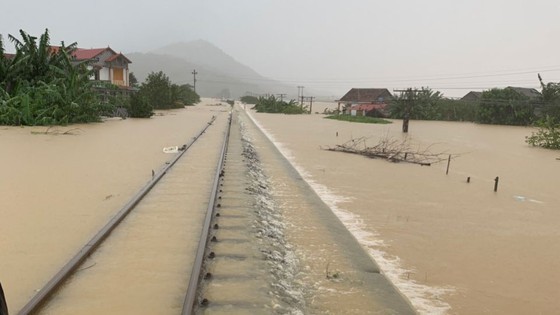 A section of railway line in Quang Binh Province is flooded.