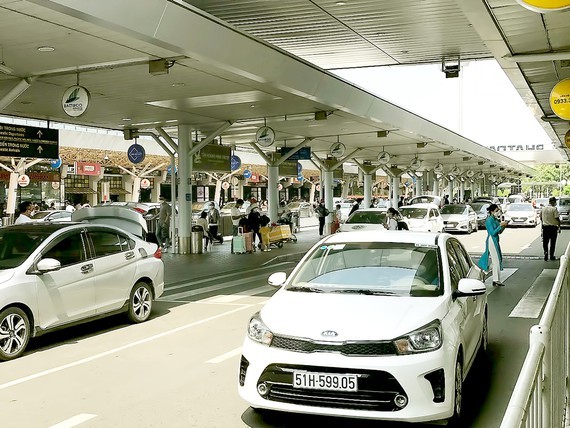 Accordingly, the D1 lane has been built parallel with other lanes in front of the domestic station, fully equipped with road signs and ticket towers, as a backup for the D lane – the parking for taxis and cars signing a contract with the airport for passenger pick-up and drop-off purposes.

TCP Operation Department Head Nguyen Anh Tuan said that when there is a sudden surge of passenger in the station, the D1 lane might be open for use as requested by management in order to avoid congestions and unnecessary crowds.

In the end of 2020, the inner traffic in Tan Son Nhat International Airport was rearranged, with four lanes A, B, C, and D in front of the domestic station being used for passenger dropping off (lane A), and picking up (lane B and C for private cars and lane D inside TCP Garage for taxis of transport businesses).

After adjustment, tech-based taxis and contracted cars are now allowed on those lanes but have to use the 3rd, 4th, and 5th floors of TCP Garage for picking up purposes. Only Bee Co. after signing a contract with the airport is approved to serve passengers at the international station, which is 100 meters away.

To minimize congestions and crowds, Head Tuan informed that, besides the normal stairs, four lifts have been exploited inside TCP Garage to help passengers move their luggage more conveniently. The garage also assign sufficient staff to instruct people to move around easily.