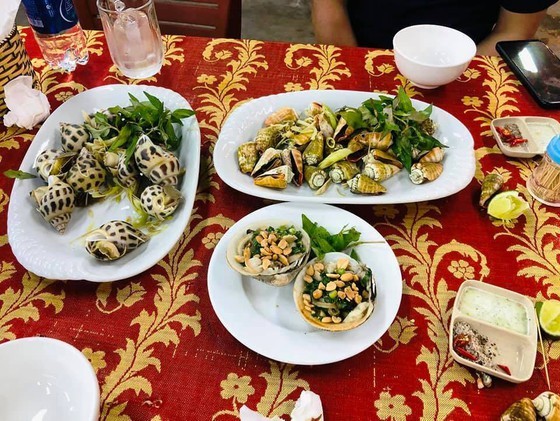 The meal Van Le reported being billed too high

The tourist annoyingly said that he had already asked for the detailed price of each seafood kind before ordering, yet in the end he was still billed illogically. Among them, the price of sweet snail was the most unacceptable, at VND1.8 million per kilo ($78.4).

Explaining the situation to the local authorities, Nguyen Van Luong – the restaurant owner – first confirmed that the discussed bill was from his restaurant. He further stated that sweet snails in his restaurant have diverse sizes, some of which are extremely large and unique in the city (18-19 snails per kilo). This leads to such a high input price of VND1.2 million a kilo ($52.3). Therefore, the retail price mentioned above is not at all overpriced.

He also displayed the bills of other customers as an illustration, one of which was over VND9 million ($392) for a meal including 2.4 kilo of sweet snail.

Van La said that he had visited the People’s Committee of the ward where the restaurant was sited right on that day, but had been instructed to contact the special tourism-support hotline of the province instead, since this organization was not authorized for such matters.

However, Nguyen Thi Le Thanh, Deputy Director of Khanh Hoa Province Department of Tourism, shared that the concerned tourist did not report the case to the above hotline.