According to Mr. Ho An Phong, Director of Quang Binh Tourism Department, Google has signed a principal contract with this agency.

From June 24 to June 28, six content creators of Google Adventure Vietnam program on YouTube in Germany, Taiwan (China), South Korea, Vietnam and the Philippines in the fields of tourism, cuisine, beauty, lifestyle, etc will visit the central provinces and cities of Quang Binh, Hue, Da Nang and Quang Nam to create contents on their Youtube channels.

After the visit, the Youtubers will take the whole stories as well as experiences to their personal channel serving for millions subscribers.

After this event, Google will continue to promote the image of the localities with 1000 best beautiful and colourful photos on Google Arts & Culture - the global cultural and art library, which allows users to access the image assets, legacy data of more than a thousand organizations worldwide with 370 million views from 66 million users widely in 80 countries.

Earlier, Vice Director of the Department of Culture, Sports and Tourism of Quang Nam province Mr. Le Ngoc Truong had issued the Official Letter No. 592 agreeing to approve the Tourism Department of Quang Binh province as the representative to sign cooperation documents, agreements on transferring and saving data archives, photos and videos of places and tourism products in the Central province with Google.

Besides that, Da Nang and Hue also had similar letters of authorization to the Quang Binh Tourism Department. 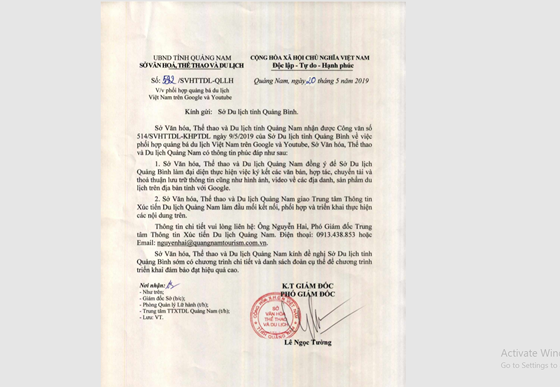 The official letter of the Department of Culture, Sports and Tourism of Quang Nam province about agreeing to approve the Tourism Department of Quang Binh province as a partner to sign the tourism promotion cooperation with Google.