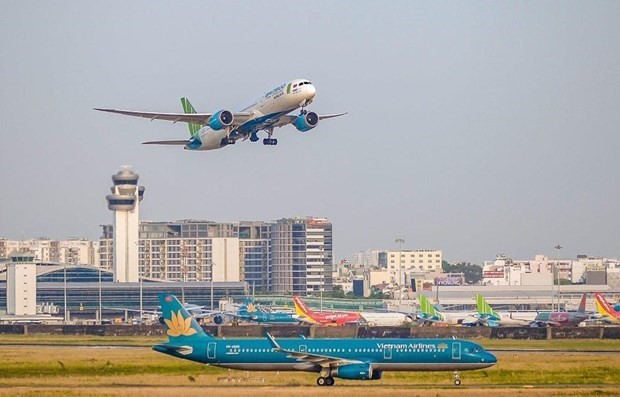 Accordingly, passengers who meet all criteria by the ministries of transport and health will be put under quarantine at home and follow Covid-19 prevention and control measures in line with the State and city’s regulations.
The Hanoi authorities also asked the Ministry of Transport to direct its units to work closely with departments and agencies of Hanoi, cities and provinces concerned in the process of bringing passengers to and from Noi Bai international airport, ensuring safety in pandemic prevention and control.
The municipal Health Department was assigned to acquire passengers’ information and work with airport authorities and airlines to take epidemiological control over them in line with anti-pandemic regulations.
At 5pm the same day, Vietnam Airlines’ VNA216 flight departed from Ho Chi Minh City to Hanoi, carrying nearly 120 passengers on wide-body Boeing 787. It was the first commercial flight between Ho Chi Minh City and Hanoi after several domestic routes reopened a day earlier.
They all confirmed the host quarantine establishments before departure, tested negative to SARS-CoV-2, received enough vaccine shots, filled out health declarations and followed 5K regulations.
Also on October 11, the People’s Committee of the northern city of Hai Phong issued Document No.7611/UBND-VX on the control of passengers to and from Cat Bi international airport when domestic commercial flights are resumed.
Accordingly, they will be exempt from concentrated quarantine. Those from high-risk areas must isolate themselves at home for a week, and test for SARS-CoV-2 using RT-PCR method on the 2nd and 7th days.
Meanwhile, those from at-risk or new normal areas must oversee their health for two weeks and test for SARS-CoV-2 using RT-PCR method every Saturday.
All testing and other costs will be covered by themselves.
So far, national flag carrier Vietnam Airlines has resumed two-way flights between Hanoi and Ho Chi Minh City and Da Nang, between Ho Chi Minh City and Hai Phong, Vinh, Thanh Hoa, Quy Nhon, Hue, Da Nang, Quang Nam, Dong Hoi, Nha Trang, Tuy Hoa, Phu Quoc. The flights between Ho Chi Minh City and Rach Gia of Ca Mau are run by VASCO, a member of Vietnam Airlines Group.