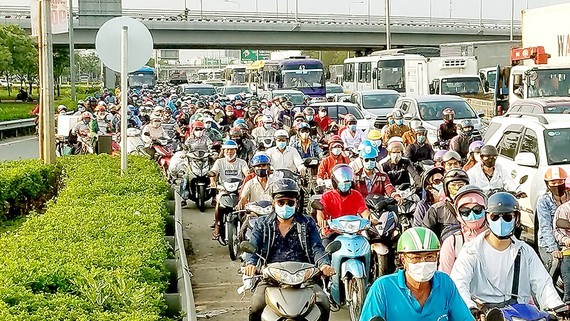 National Way No.13 near the Eastern Coach Station witnesses congestion when vehicles after vehicles were rushing back to HCMC. (Photo: SGGP)

On May 3, the last day of this long holiday, police officers had to continuously direct traffic flows to ensure safety and minimize congestion. However, local traffic jams at infamous hot spots were unavoidable.

HCMC – Long Thanh – Dau Giay Expressway witnessed a rise of vehicle quantity in the afternoon because of people coming back to HCMC from their hometowns in Dong Nai Province, Ba Ria – Vung Tau Province, and other South Central provinces. Local congestion was seen at toll towers.

In the Eastern gate to HCMC, vehicles were moving extremely slowly on National Way No.13 and No.1, connecting Binh Duong Province and HCMC. Particularly, at 6:30pm, traffic became chaotic. Luckily, at the Eastern Coach Station, despite the increase of coaches entering the city from other tourist locations of Phan Thiet City, Da Lat City, Ba Ria – Vung Tau Province, there was no serious crowd.

In the Western gate to HCMC, traffic jams happened more regularly on National Way No.1 passing Binh Dien Bridge and Tan Tao bottleneck in Binh Chanh District. At 6:00pm, the traffic was rather out of control on Kinh Duong Vuong Street of Binh Tan District and Vo Tran Chi Street of Binh Chanh District. Traffic police forces timely appeared to direct the flow and maintain the order.

At Cat Lai Ferry Station to connect Thu Duc City of HCMC and Nhon Trach District of Dong Nai Province, the quantity of vehicles moving from neighboring provinces to HCMC rose remarkably from 4:00pm, leading to an exceedingly long waiting line of 2km. 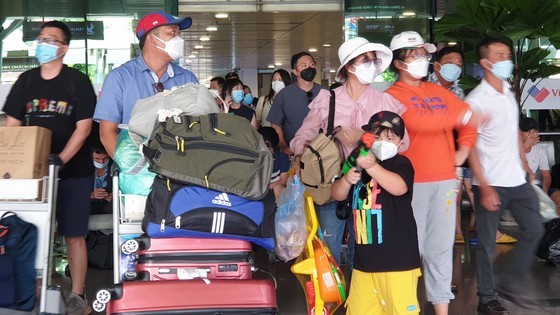 Passengers land at Tan Son Nhat International Airport in the evening of May 3. (Photo: SGGP)
Tan Son Nhat International Airport on May 3 served 55,000-60,000 passengers in the domestic station, an equivalence to this Tet Holiday a few months ago. This created a considerable pressure on the taxi directing task. All taxi companies had to mobilize vehicles from other locations to the airport to satisfy the temporarily growing need of these passengers, while airlines were asked to assign sufficient staff to aid travelers in order to minimize flight delays or cancelation.

The 25R/07L runway was timely put into use, increasing the number of taking-off and landing slots to 40 each hour, effectively addressing congestion at this peak time.

In related news, by the end of the afternoon of May 3, gateways to Hanoi saw long lines of traffic to the city, but there was no serious congestion. The reason was that people returned to the capital sooner than expected for fear of annoying traffic jams. Vehicles were moving rather slowly on infamous traffic hot spots like Phap Van – Giai Phong Intersection, Ring Road No.3, Thanh Tri Bridge, Vinh Tuy Bridge, Le Trong Tan – Ha Dong Street.

On the roads in front of major coach stations such as Giai Phong Street near Giap Bat Coach Station or Nuoc Ngam Street and Pham Hung Streets near My Dinh Coach Station, taxis and motorbike taxis unorderly picked up customers, severely disturbing traffic.

Noi Bai International Airport reported that on May 3, it served 427 flights. At rush hours, there were 2,500 passengers per hour at the airport. No big crowd was seen as buses and taxis worked quite effectively and smoothly to serve these passengers.