High-speed boat linking the Mekong Delta city of Can Tho and Con Dao island in Ba Ria-Vung Tau province is resumed. (Photo: SGGP)
The boat will be operational by Mai Linh Tay Do JSC with two trips per day. It departs from Can Tho’s Ninh Kieu Wharf to Dam Wharf in Con Dao island.

The Mai Linh Express ship's passenger capacity is around 300 travelers. It takes 3.5 hours-4.5 hours to travel between two spots.
The service was launched by the Phu Quoc Express JSC in December, 2019. The boat departs from Can Tho’s Ninh Kieu Wharf to Tran De seaport in the southern province of Soc Trang to pick up and drop off passengers before continuing its journey to Con Dao. The ship can transport 600 passengers in the cabin and 100 on deck per trip from mainland to the island at a speed of 35 nautical miles per hour.
The high speed boat's operation was suspended since August, 2020 because local residents living along the Hau River expressed concerns over impacts of fishing activities and landslides on both banks due to big waves created by ships sailing on the river.
Mai Linh Tay Do JSC decided to use 300-seat ship with the power of two engines, instead of 600-seat vessel with four diesel engines; reduce operational speed of the ship by 17 nautical miles per hour (around 30 kilometers per hour) rather than 32 nautical miles per hour (around 60 kilometers per hour) to limit the formation of big waves.
The company chose Dinh An route instead of Tran De in order not to affect local livelihood activities and has coordinated with local authorities to inform cruise itinerary timetables to residents. 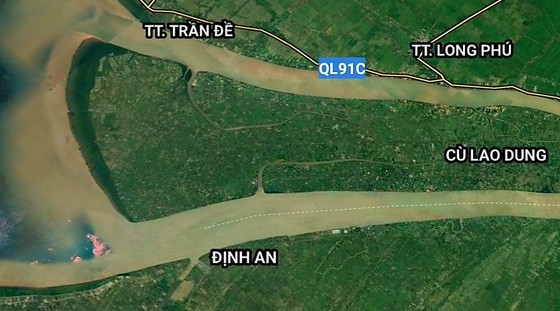 The boat will be operational on Dinh An route.