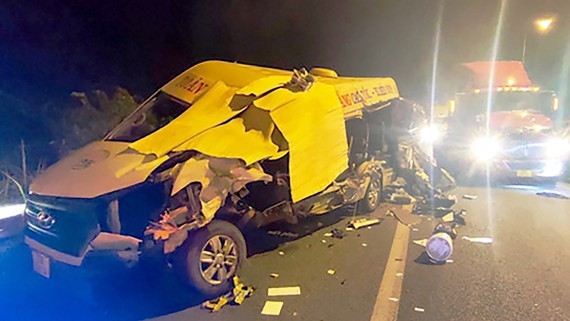 Huynh Tuan Thanh from Tan Phu District of HCMC, a regular driver on HCMC – Trung Luong Expressway, informed that vehicles entering the emergency lane here is so frequent every time congestion happen that traffic seems chaotic. When an accident happens, the emergency team finds it hard to approach victims also due to this. Adding to that is the bumpy road surface and low road friction compared to HCMC – Long Thanh – Dau Giay Expressway. Therefore, he rarely runs past the velocity of 80km/hour.

A quick observation on this this expressway reveals that not only sedans or 50-seat coaches but also container trucks often travel on wrong lanes. Since 2019, when the toll collection stations stopped operation, the proportion of vehicles using this way has increased by 30-40 percent. Each day, the expressway serves from 30,000-40,000 vehicles; and in peak periods like Tet Holiday, it could double. Hence, the situation of automobiles using the emergency lane is unavoidable and understandable.

The Traffic Police Authority (under the Ministry of Public Security) stated that in the upcoming time, it will handle this state more strictly, fining violators using the three sources of the camera system of the road management unit, the patrolling teams, and information provided by the public.

Another worrying matter is the degrade status of the road surface and uncontrollability of heavy vehicles passing 30-tonne bridges on the route, which could gradually destroy them and pose grave threats to other travelers.

To ensure safety on this expressway, Assoc. Prof. Dr. Tran Chung, Chairman of the Vietnam Association of Road Traffic Investors, stated that his association has submitted various proposals in a written form to the Transport Ministry.

The Directorate for Roads of Vietnam is asked to urgently complete the toll collection project for HCMC – Trung Luong Expressway to control the types and weight of transport means entering this way, to generate revenues for the state budget, and to have sufficient money for maintenance tasks.

Assoc. Prof. Dr Pham Xuan Mai from Ho Chi Minh City University of Technology said that over 96 percent of goods transported via roads causes overloading traffic infrastructure. Both lanes of each direction on HCMC – Trung Luong Expressway have mixed circulation, which is unwise.

He suggested a solution to eliminate congestion. The lane next to the median strip should be saved for 4-to-16-seat automobiles, while the other lane may have mixed circulation. Heavy trucks and container ones should be limited to enter this expressway, and are advisable to use the normal national way as they cannot reach the speed of 80-120km/hour on expressways.

Road experts also agreed with this view, saying that it is high time the authorities controlled vehicle types moving on HCMC – Trung Luong Expressway and applied toll collection in order to limit accidents or congestion.

Statistics of the Traffic Police Authority show that since the beginning of this year, there have been 106 traffic accidents on both HCMC – Trung Luong Expressway and HCMC – Long Thanh – Dau Giay Expressway, killing 10 people and injuring 36 individuals. Among them are 76 accidents on the former, killing 7 people and injuring 22 individuals. The primary reason for this difference is that the latter is better organized and maintained thanks to the toll currently being collected.