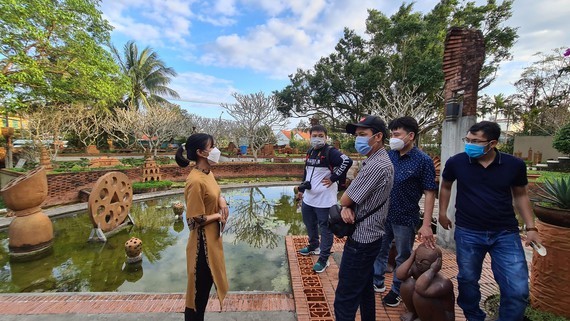 Tourists visit Thanh Ha pottery village  in the city of Hoi An, Quang Nam province.
It has been a long time that Hue Imperial Citadel received a group of international visitors who come from a non-government organization in Hanoi.

The tour guide of the delegation expressed her happiness at bringing tourists visiting Hue relic sites nearly one year after taking temporary suspension from work due to Covid-19. She hoped that the number of travelers would increase in the coming time.

Hoi An City in Quang Nam province has also seen an increase of travelers in the first days of the year. Hotels and resorts are almost full and entertainment venues reopen to welcome back tourists with many promotional programs.

Director of the provincial Department of Culture, Sports and Tourism Nguyen Thanh Hong said that the department has launched a program that is part of the National Tourism Year 2022 to be kicked off on March 25 in Hoi An City in Quang Nam Province.

Da Nang City plans to organize many activities marking the lunar New Year, such as a space of installation art greeting New Year held along embankment on the Han River, art and music performances, a whale-worshiping ceremony and more.

Vice Chairwoman of the People’s Committee of Da Nang City Ngo Thi Kim Yen said that the city focuses on directing the pandemic prevention and control work as well as supporting the tourism industry to effectively implement a plan for tourism recovery in accordance with measures on “Safe and flexible adaptation and effective control over the Covid-19 pandemic” measures. The city will continuously provide free of charge entry to attractions, including Ngu Hanh Son mountain, Museum of Cham Sculpture, Da Nang Museum, Fine Arts Museum.

The tourism industry of Quang Binh Province is expected to draw two million visitors in 2022. The province has offered a discount of 20-50 percent for admission tickets to caves to explore the primeval forest.

Meanwhile Da Lat resort town in the Central Highlands province of Lam Dong is expected to receive a huge number of visitors during Tet holidays. The province’s tourism sector has made preparations for the peak demand during festive season, especially tightening prevention and control measures of the disease.

Rooms of hotels in the coastal city of Vung Tau in Ba Ria-Vung Tau Province have been nearly sold out.