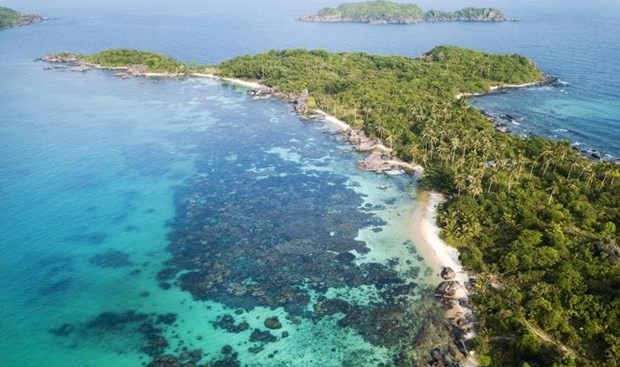 A corner of Phu Quoc island (Photo: vneconomy)
The magazine asked its readers to vote in a range of categories, including the most favourite countries, the best cities, resorts and resort islands, to honour the top destinations in the world.
With white sand beaches and good foods, Phu Quoc is also famous as a cradle for the craft of making fish sauce and cultivating pepper and is home to natural coral reefs and thick tropical forests.
The island is now taken as a relaxation paradise for both domestic and foreign tourists. It boasts primaeval forests and pristine beaches dotting its 150km coastline.

Hon May Rut, one of the most beautiful islets on Phu Quoc. (Photo: VNA)
The Philippines’ Boracay island topped the ranking. Its Palawan island was also present in the list.
Thailand has the most favourite islands, including Koh Samui, Phuket and Phi Phi.
Among the most favourite countries 2022, Thailand came third and Japan second in Asia. Spain became the most popular in the list.
In 2020, CNTraveler voted Vietnam as one of the most 20 favourite destinations at the ninth place.