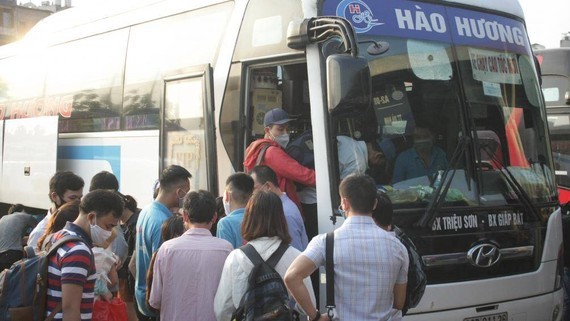 Passenger transport fares have cooled down. (Photo: SGGP)
According to the Ministry of Transport, 63.98 percent of taxi enterprises have reduced their fares by VND800-VND1,000 per km, equivalent to 4.5-12 percent.

Similarly, about 44.6 percent of passenger transport enterprises on fixed routes have also lowered ticket prices by 5.26-14.7 percent. In addition, tourist transport and contract transport services fluctuate depending on the time of the year.

For railways, up to now, railway joint stock companies have launched two promotion programs in which freight rates have been cut by 5 percent, and passenger transport rates have been reduced by 5-10 percent.

In the field of aviation, airlines have declared various price ranges from low to high, ensuring not to exceed the prescribed maximum price, and publicly listed ticket prices on the airlines’ websites.

The Ministry of Transport also said that in the coming time, it would continue to direct agencies and units to strengthen inspection of the declaration and listing of freight rates and train and bus fares following regulations, especially on holidays.

The competent authorities will continue to monitor and grasp the fluctuations of petrol prices to promptly direct the price declaration of enterprises and transport units in accordance with the reduction of petrol prices to serve well the travel demand.