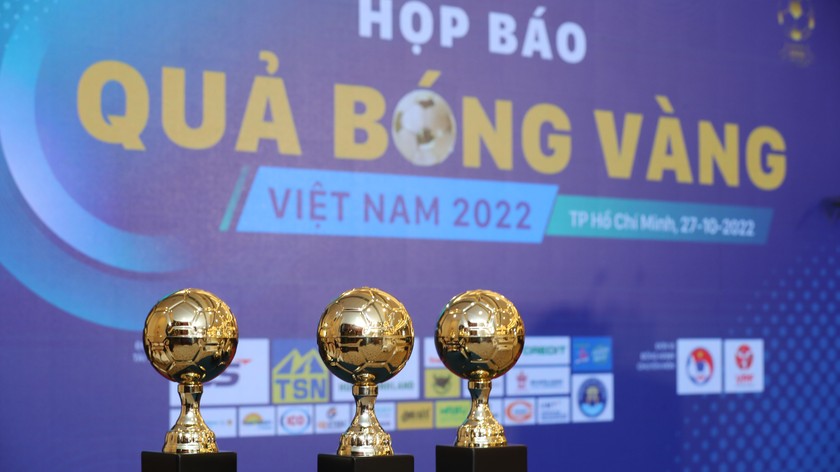 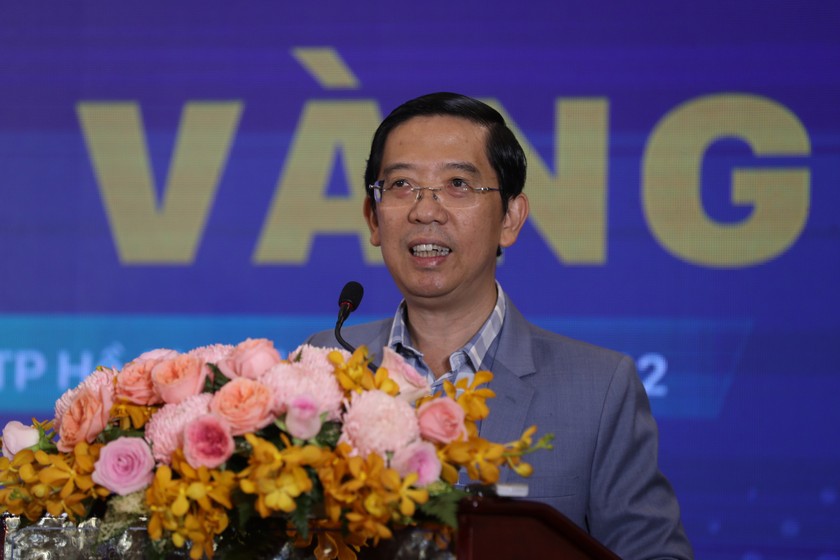 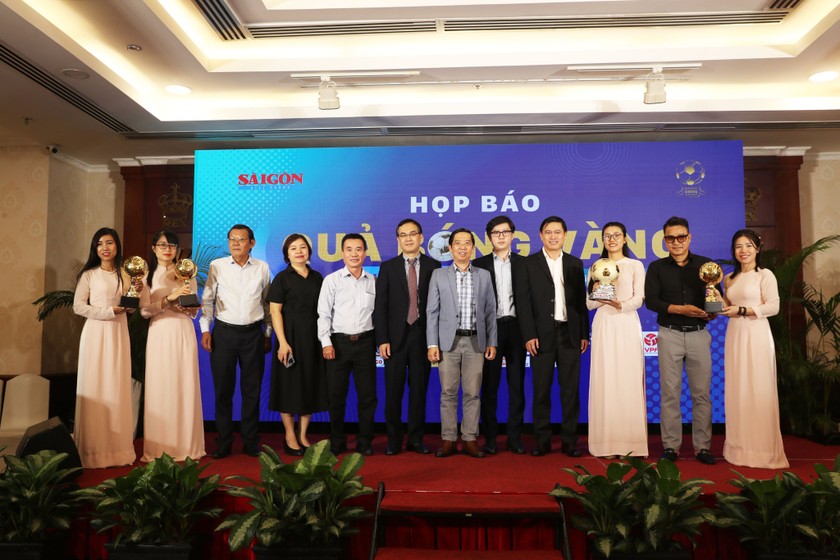 The organizing committee and delegates introduce the trophies of this year's awards. (Photo: SGGP)
It is expected that in mid-November 2022, the organizing committee will send voting invitations and a list of candidates to voters, who are football experts, coaches of football teams, coaches, captains of V-League clubs, the women's football team, the futsal team, and journalists from news agencies across the country.

The Vietnam Golden Ball Awards 2022 ceremony is expected to take place in February 2023 in HCMC.

According to Mr. Nguyen Nhat, after two years of the Covid-19 pandemic, the Organizing Committee of the Vietnam Golden Ball Awards also encountered the same difficulties with the country, HCMC, and Vietnamese football. Some award categories could not be given last year, but this year, the traditional awards of the Vietnam Golden Ball Awards will return. 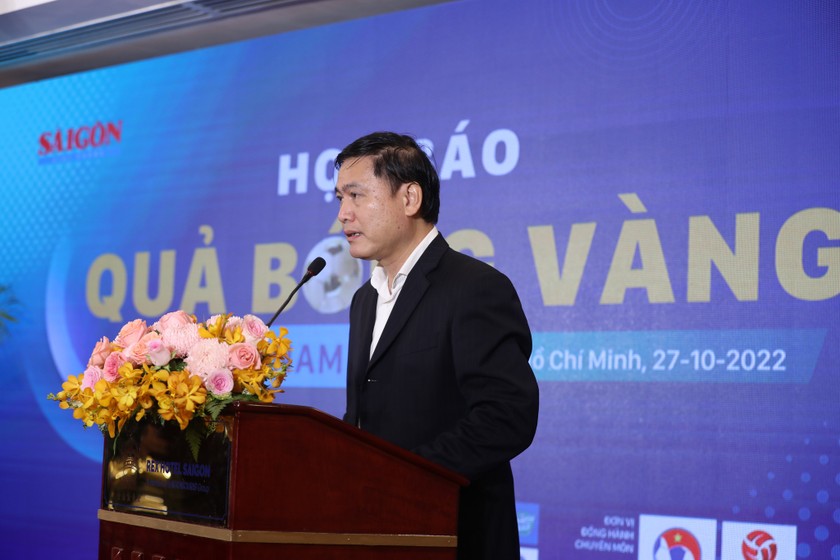 Mr. Tran Anh Tu, Standing Member of the Executive Committee of the Vietnam Football Federation. (Photo: SGGP)
Everyone can feel the Vietnamese football atmosphere in 2022 when the Vietnam national football team defeated China in the World Cup qualifying round on the first day of the Lunar New Year. That is the basis and encouragement. After that, Vietnam football achieved proud successes. The AFF Cup will take place at the end of the year, and the team sets big goals in this tournament. The organizing committee will set out a roadmap, closely following each match of the AFF Cup to give votes. From there, the voters will have a basis and faith to choose the best candidates.

Ballots will be distributed to voters on November 20. The expected time to collect ballots is January 18, two days after the finale of the AFF Cup. The award has to wait this year because the AFF Cup takes place at the end of December and lasts for one month. 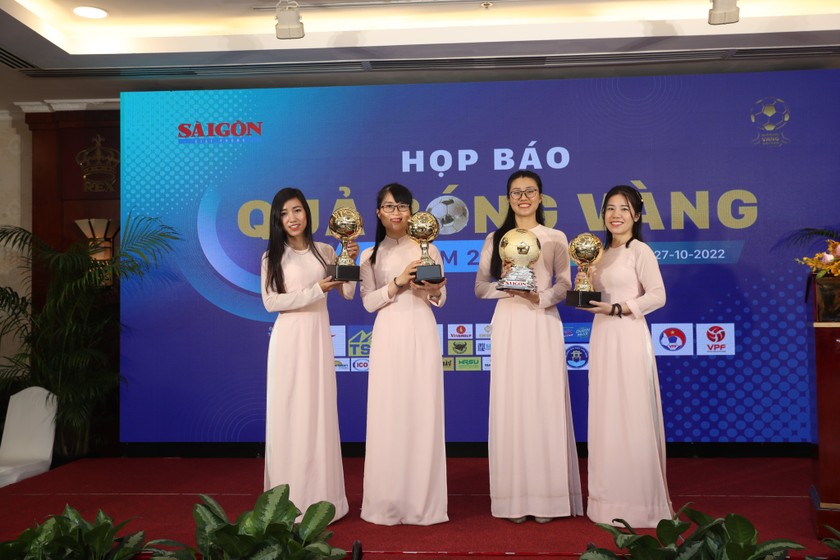 The Vietnam Golden Ball Awards' trophies. (Photo: SGGP)
Since 2016, the organizing committee has also noticed that the trophy design has not had any change. In the categories of men's, women's, and futsal golden balls, nine trophies are kept unchanged. As for the trophy design of the youth tournaments, the organizing committee has made adjustments.

Mr. Nguyen Nhat said that the new feature of this year's award is the international element. Vietnam now has some football players playing abroad, like Quang Hai or Huynh Nhu. There were such cases in history. For instance, Xuan Truong played football in South Korea. Vietnam even has Futsal players playing abroad. All those factors are in the regulations of the Golden Ball Awards. They are still the players who contribute to the overall achievements of Vietnamese football, so they meet the conditions and criteria for journalists and delegates to vote for them. 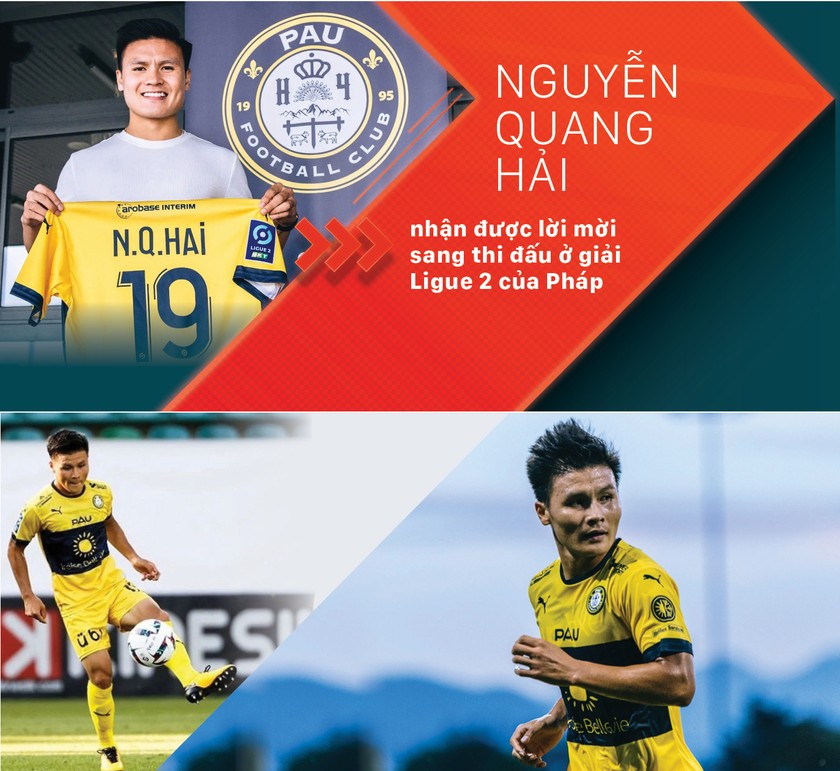 Quang Hai receives an invitation to play in the French Ligue 2. (Photo: SGGP)
The organizing committee will try to make a shorter reference list of better quality and easier to vote for the best players. A long list of outstanding football players may cause confusion in voting. The organizing committee acknowledges this request and will work with units to come up with an extremely-concise list but not miss any talented players.

At the press conference, the organizing committee also announced sponsors and companions to the Vietnam Golden Ball Awards 2022. 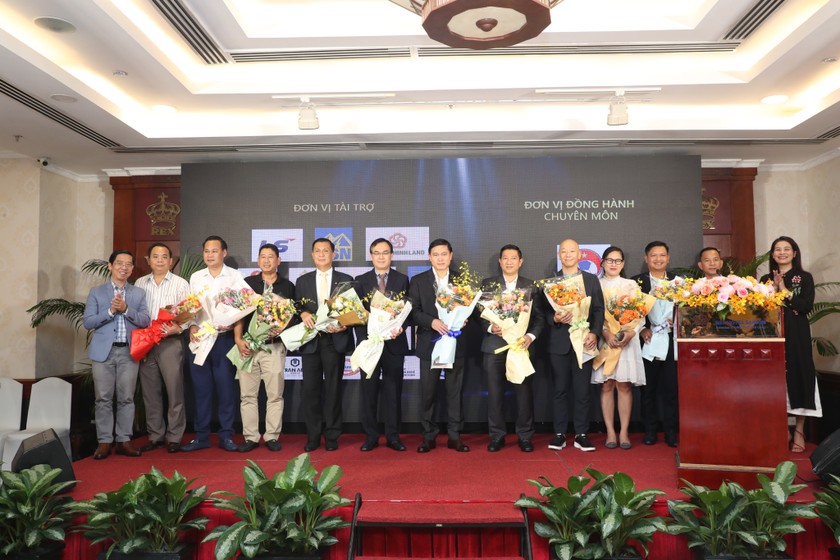 Despite being affected by the Covid-19 pandemic, Vietnam football still maintains its development and creates many encouraging results in 2022. The Vietnam national football team won the International Friendly Tournament 2022, which took place in HCMC in September, continuing to affirm its stable performance, and at the same time, introducing some talented young players. It will strengthen and motivate Vietnamese football players to prepare well for the goal of conquering the AFF Cup 2022 at the end of this year. 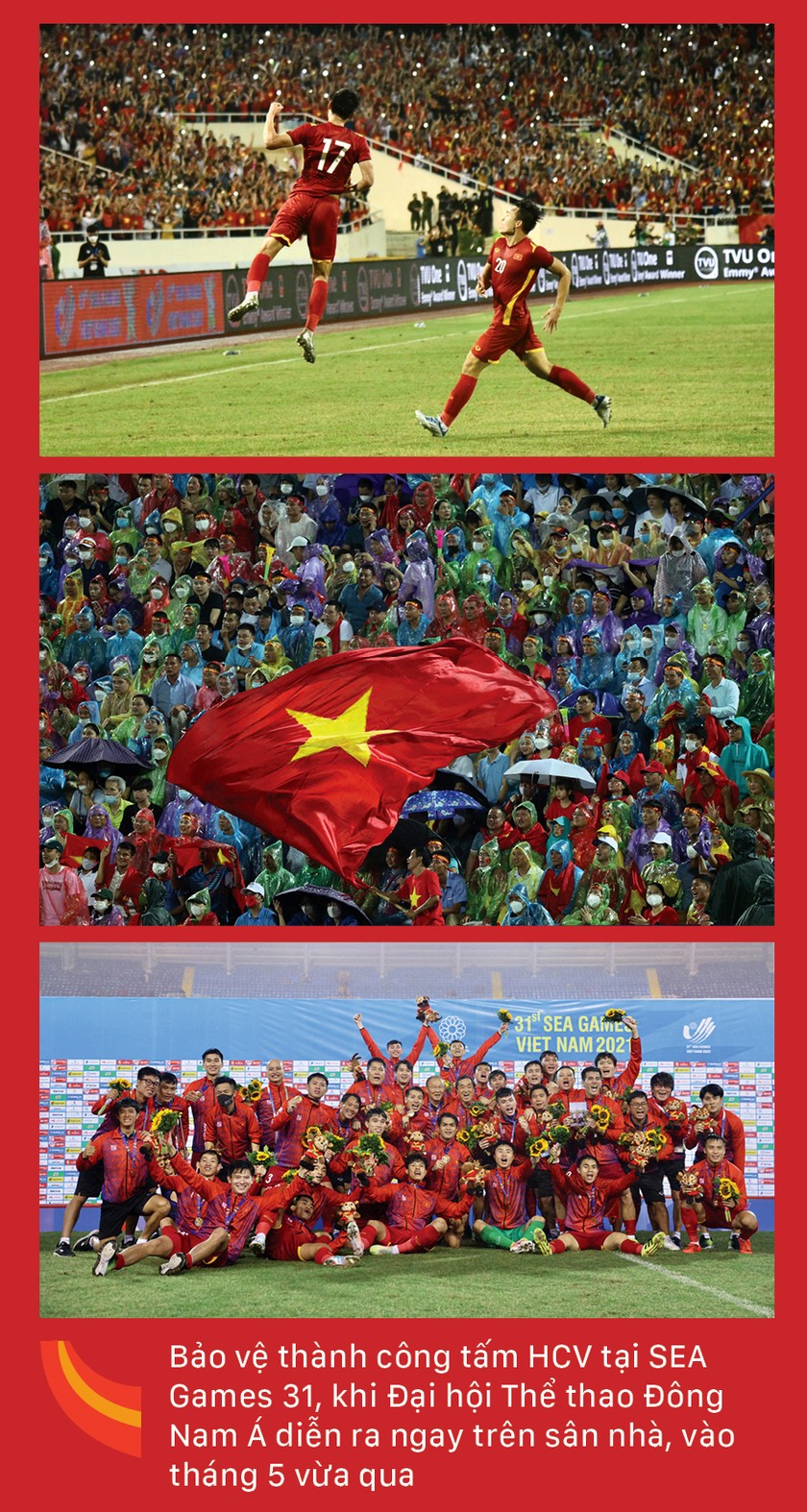 The Vietnam U23 football team successfully defended the gold medal at the 31st SEA Games, which took place at home in May. It is a great achievement because the competition from other teams in the region is extremely fierce, while the force of the Vietnam U23 team has seen significant disturbance, with many inexperienced young faces. It can also be considered a historical mark because, for the first time, the Vietnam U23 team has maintained its achievements and position in the region. 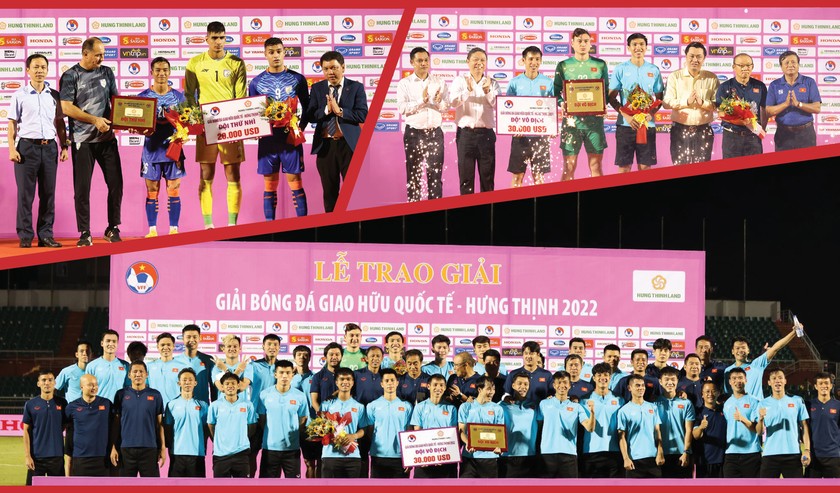 The Vietnam national football team wins the International Friendly Tournament 2022, which took place in HCMC in September. (Photo: SGGP)
The Vietnam women's football team also successfully defended the gold medal at SEA Games 31. In addition, it also made a big splash when winning an official ticket to the 2023 World Cup Finals for the first time in history after defeating several strong opponents in the region and continent. The victory against the Taipei – China women's football team on February 6, 2022, wrote that miracle story. The generation of Huynh Nhu, Chuong Thi Kieu, Tuyet Dung, Hai Yen, and Thanh Nha has become a special milestone in the development of Vietnamese women's football.

Meanwhile, after participating in the 2021 World Cup Finals, the Vietnam futsal team continued to play impressively and resiliently in international arenas, such as the 31st SEA Games and the 2022 AFC Asian Futsal Cup. The appearance of the leader who brought Argentina to the world championship in 2016 - Diego Raul Giustozzi - has helped the futsal team's gameplay become lively, flexible, and full of fighting spirit. The transformation is significant, but it also needs more time for the 44-year-old coach to adjust and bring the team to a new level. 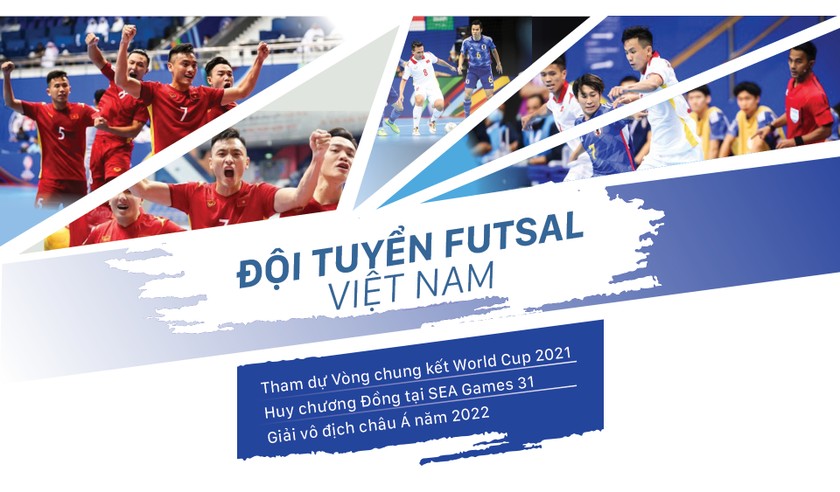 After participating in the 2021 World Cup Finals, the Vietnam futsal team continues to play impressively and resiliently in international arenas. (Photo: SGGP)
The V-League and LS V-League 2, as well as activities at football clubs, have been contributing significantly to the exciting football life in the country. In addition, two top excellent individuals in Vietnamese football, Nguyen Quang Hai and Huynh Nhu, received an invitation to play in the French Ligue 2 and the Liga BPI, respectively. That is proof of the talent of Vietnamese players being recognized at football clubs in Europe. It is also an important turning point, encouraging many good young players after them to strive harder to grasp the opportunity to play football abroad, improving the position and quality of Vietnamese football. 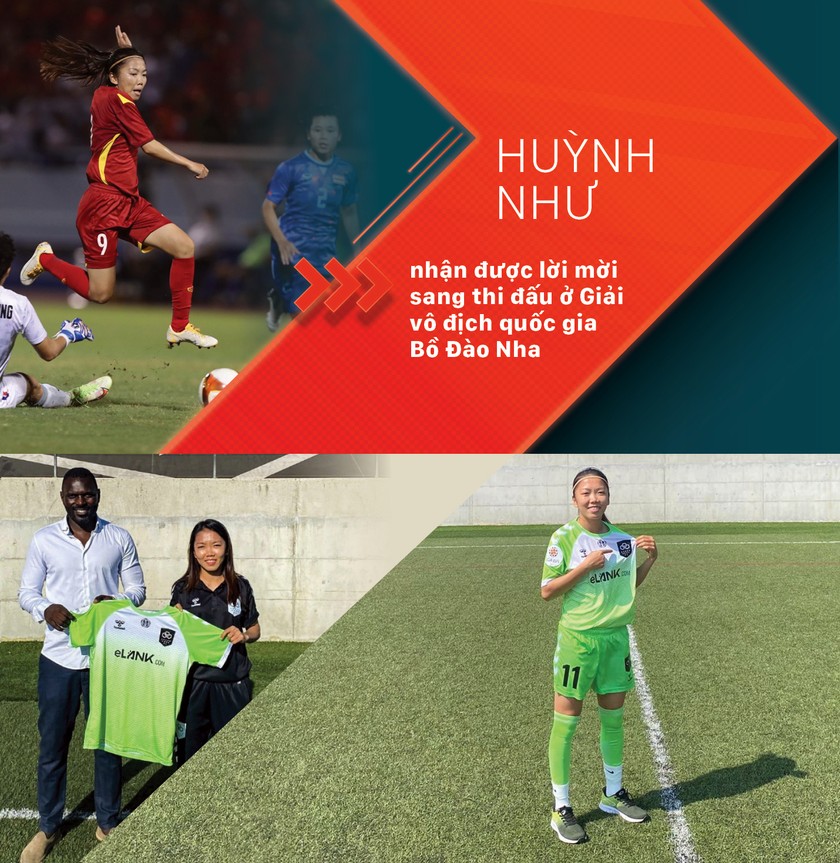 Huynh Nhu receives an invitation to play in the Liga BPI. (Photo: SGGP)
The bright spots in the domestic and international arenas over the past time have created a strong motivation for the Vietnam Golden Ball Awards to continue to take place and bring football fans a program to show gratitude to the players who have devoted themselves in 2022. Surely, the prestige and stature of this traditional award will not make the media, as well as experts, feel awkward when placing their faith in their votes.
Here are some photos at the press conference of the Vietnam Golden Ball Awards: 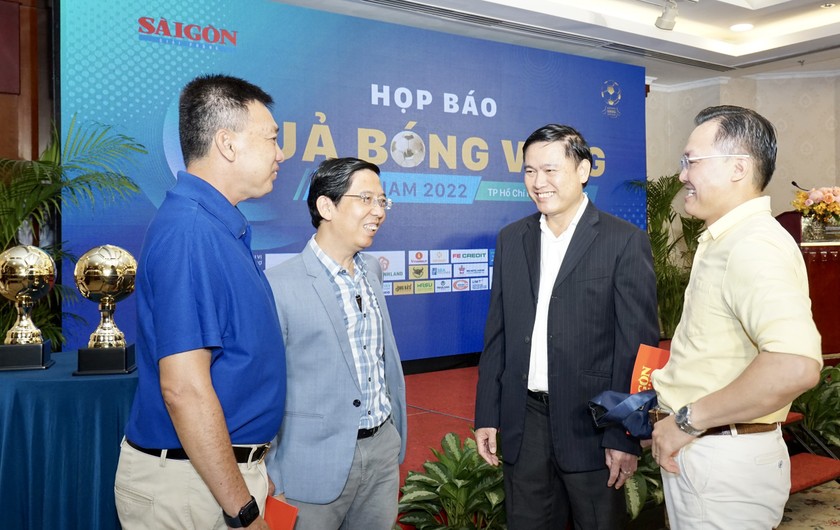 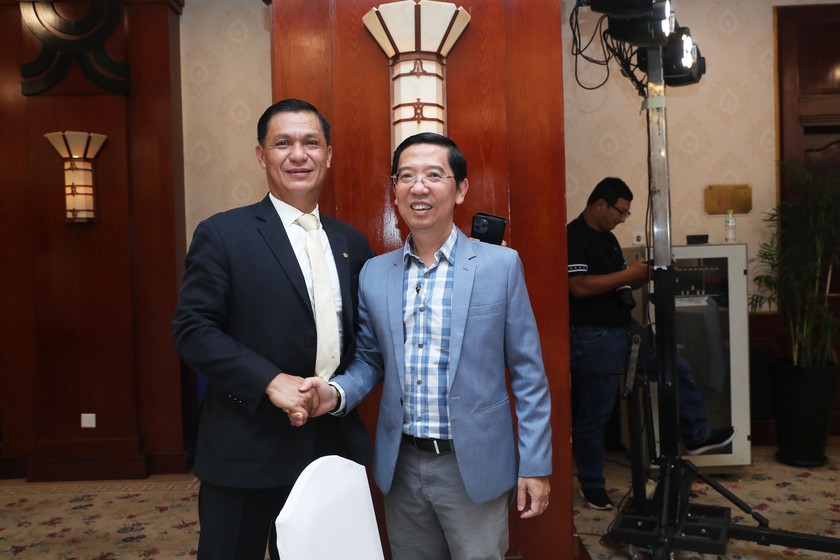 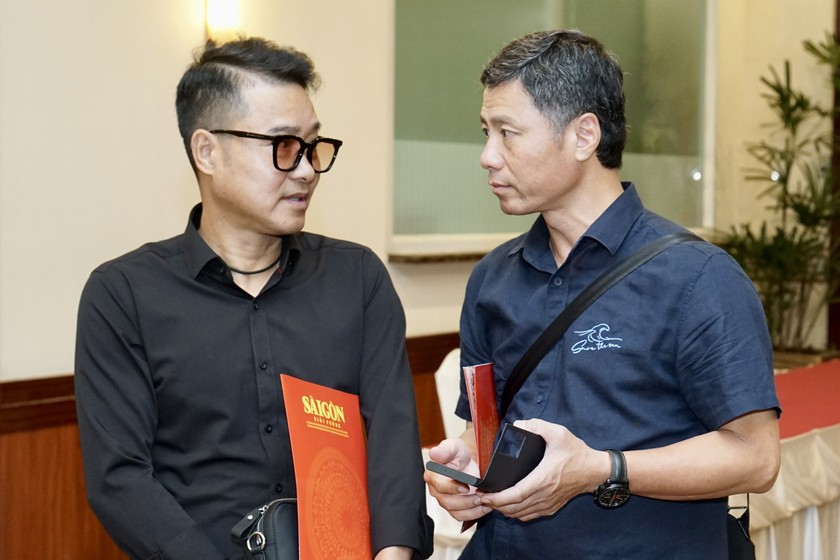 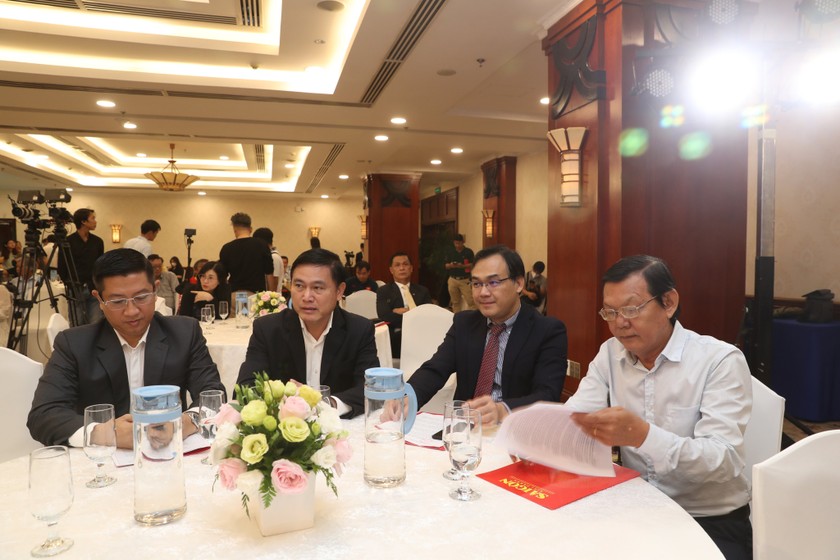 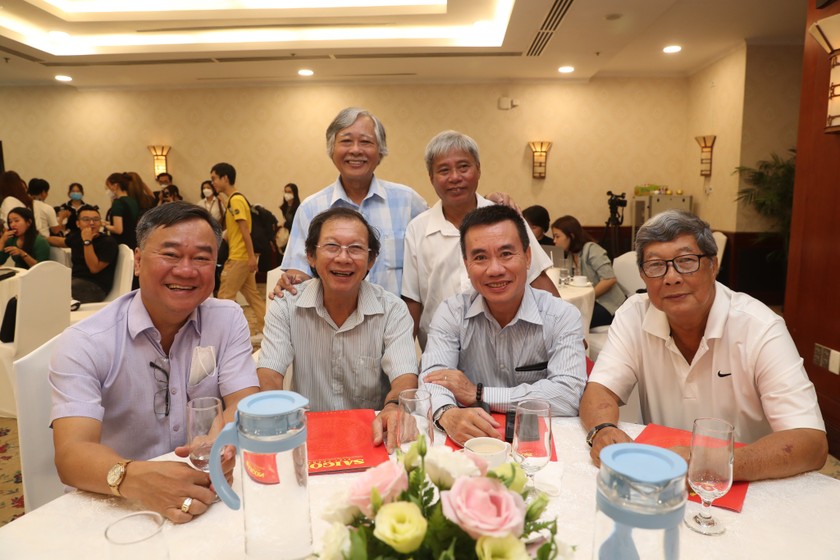 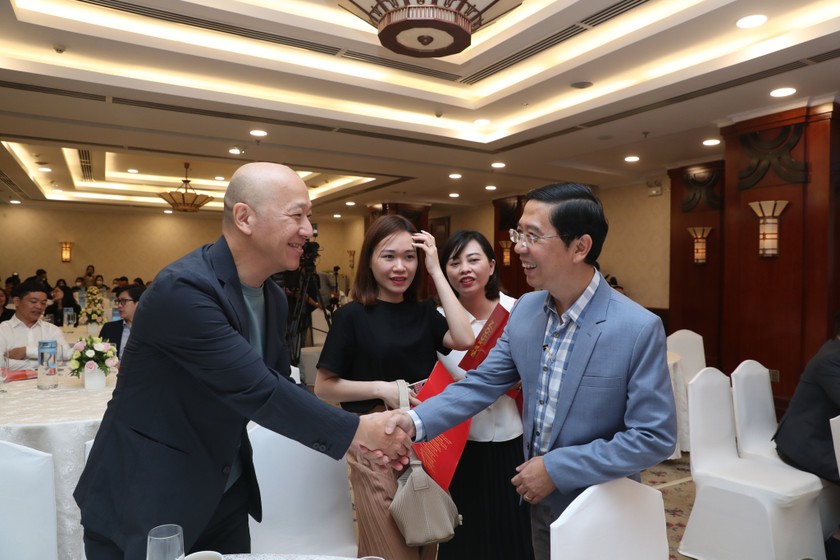 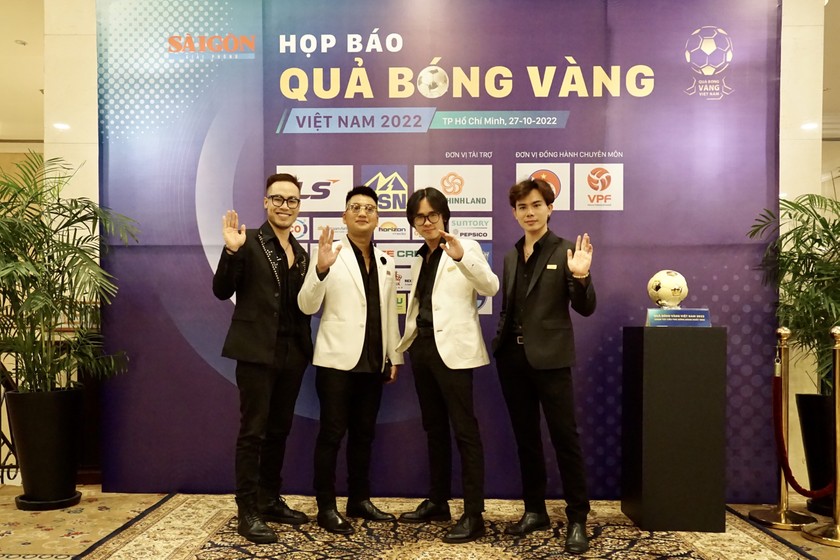 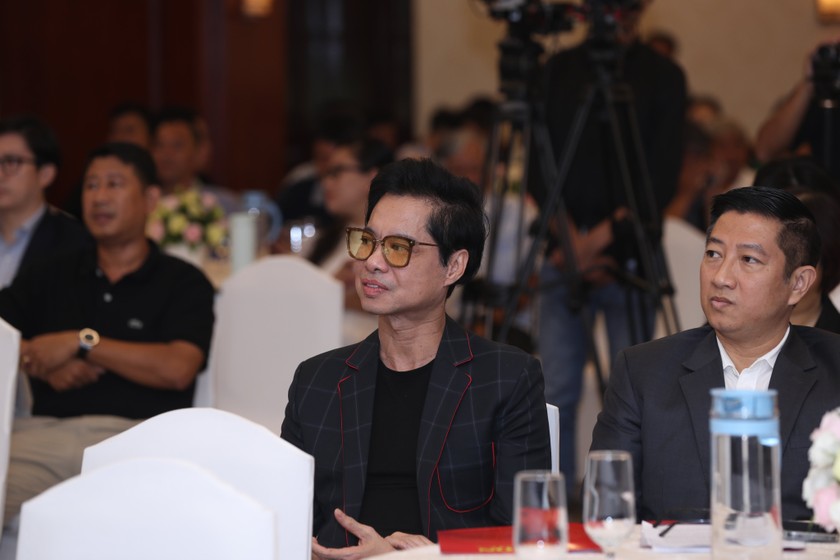 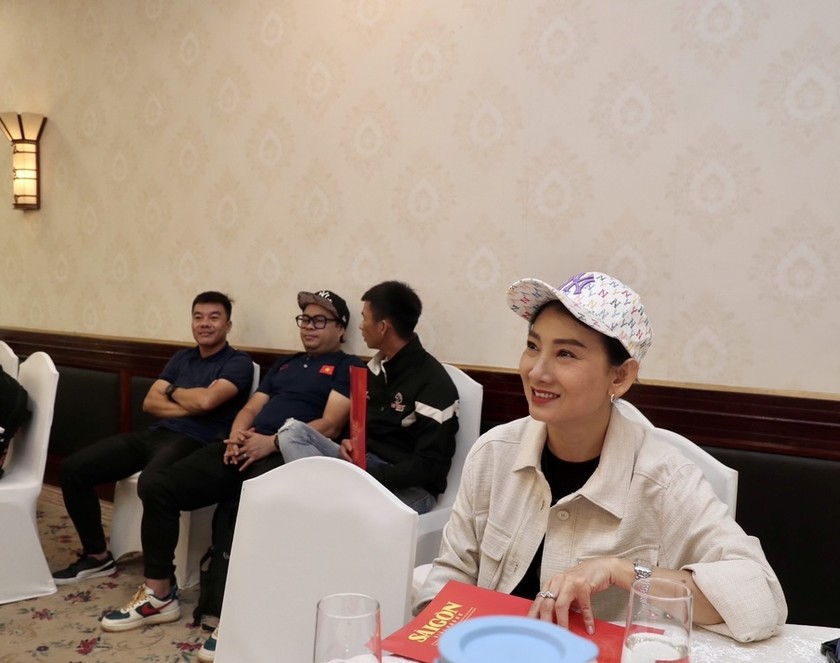 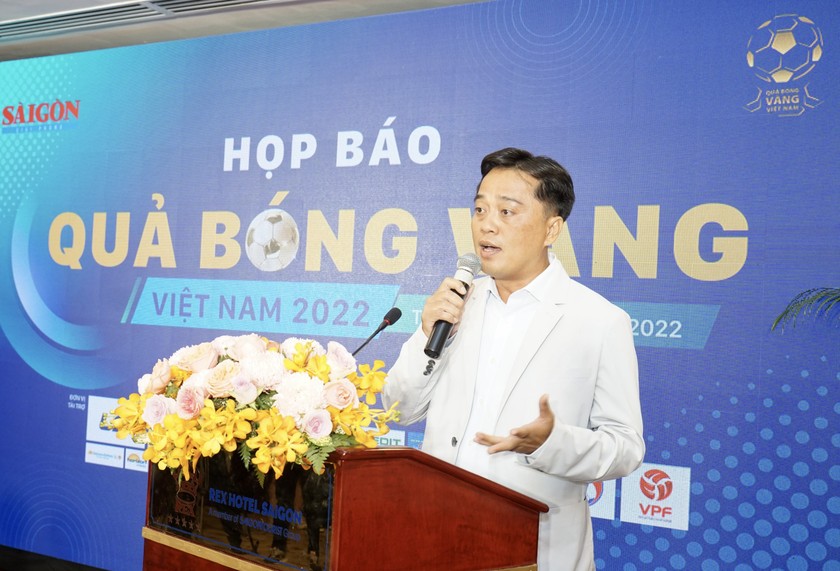 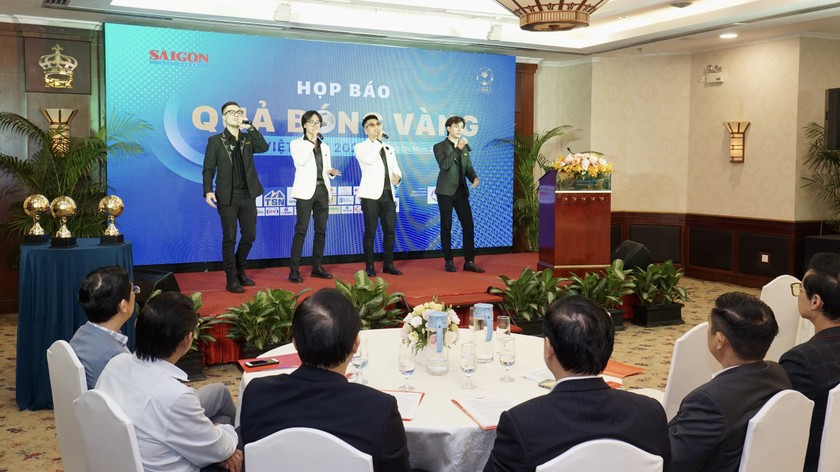 An art performance at the event. (Photo: SGGP) 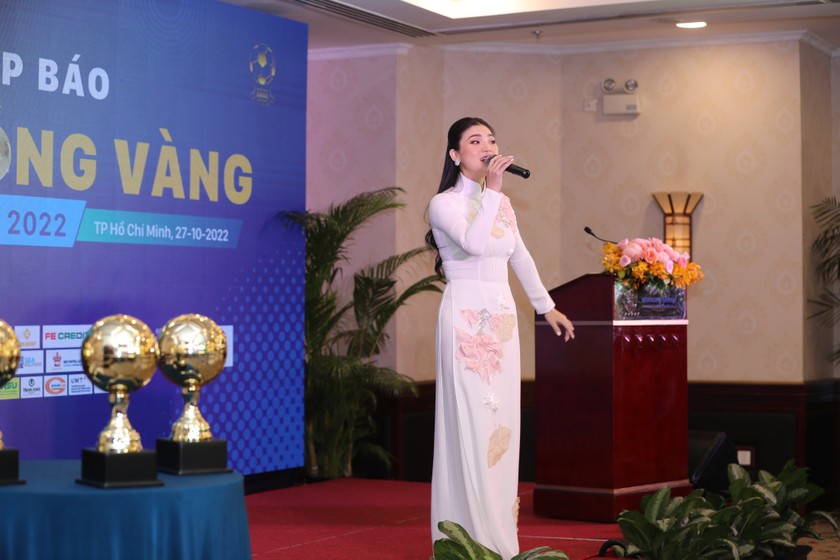 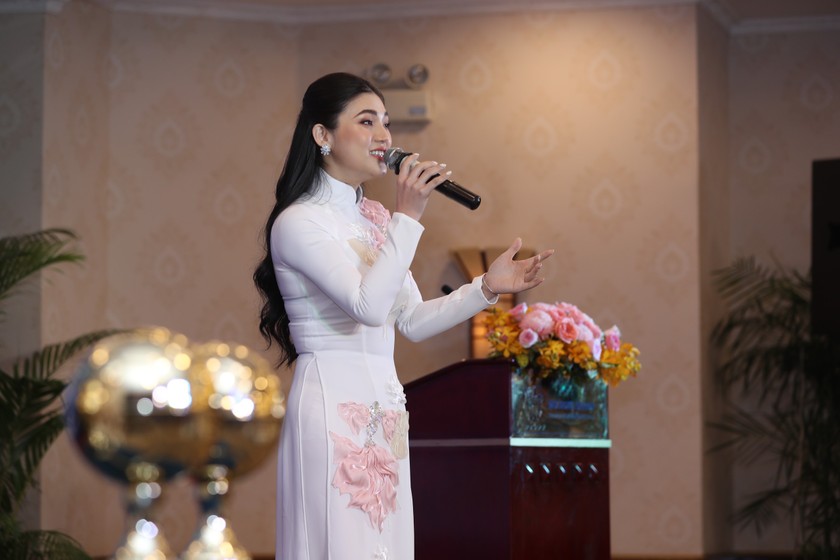 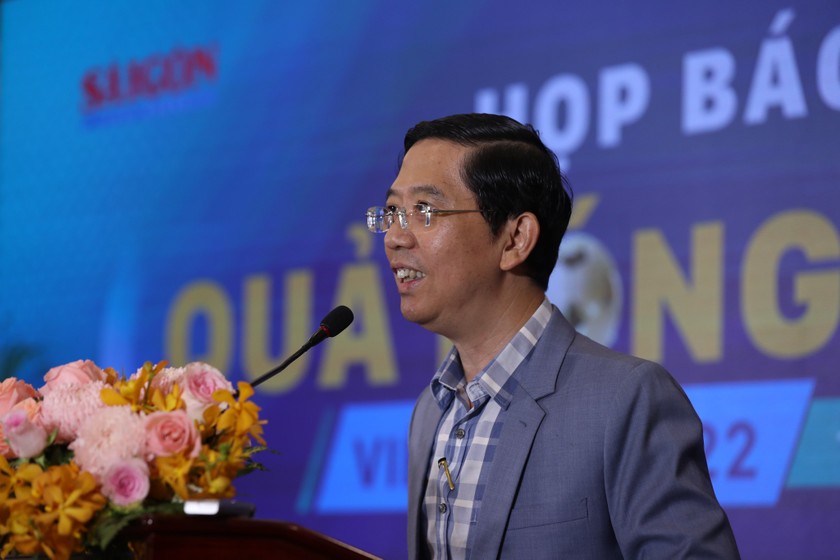 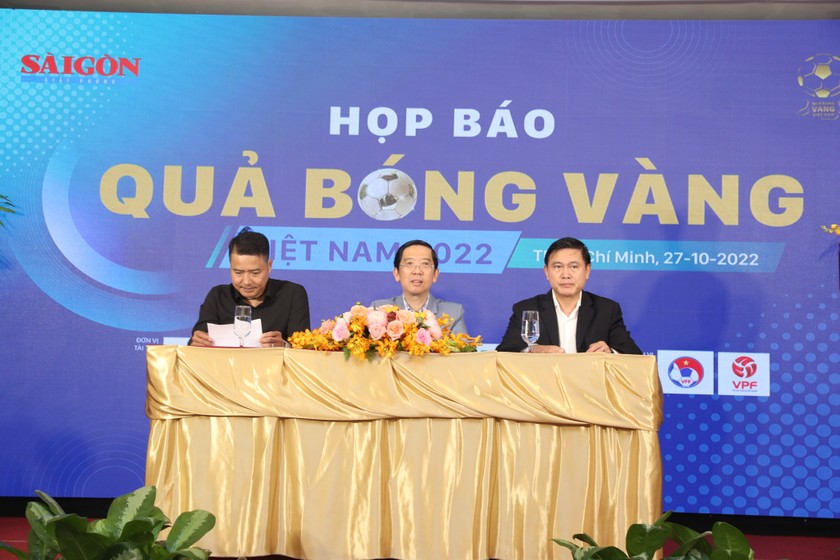 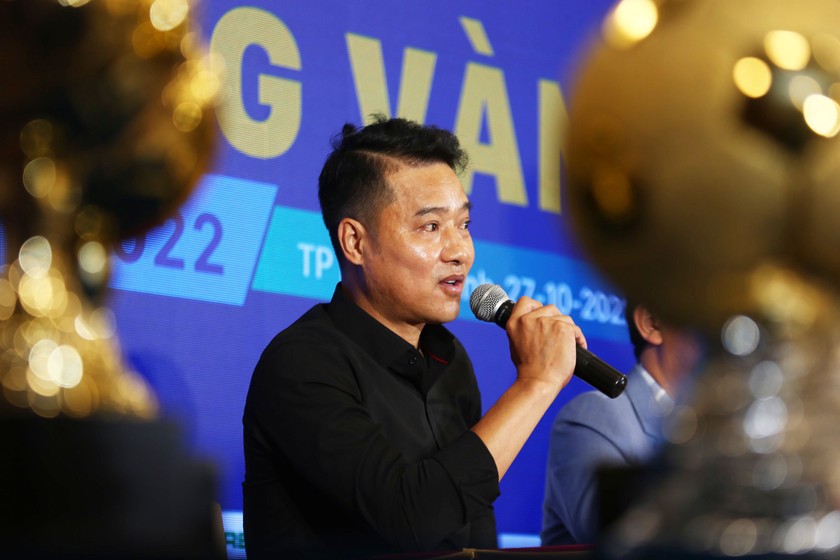 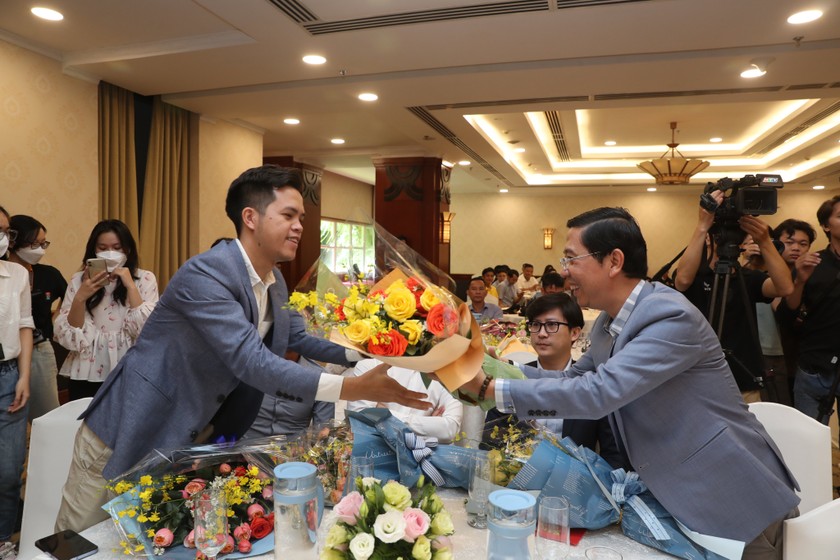