Every afternoon, many youths gather in big parks such as Chi Lang parks in District 1, Hoang Van Thu in Tan Binh District, Gia Dinh in Phu Nhuan District, Hoa Binh in District 5, or large sidewalks in front of the Reunification Palace, and in the campus of Vinhomes Central Park in Binh Thanh District to give their performances on Skateboard, an action sport that involves riding and performing tricks using a skateboard.

A twenty-five young man, Thien Long, in Phu Nhuan District said that Skateboarding is a challenging and artistic sport. Players need to have a great passion and patience as well as resilience throughout practice time because of unavoidable injures. However, when a player can manage to surf on boards and perform beautiful postures, they will feel worthwhile to put more efforts.
He shared that players must find out the techniques on the Internet, self-study, and self-practice because there are no trainers for this sport. Groups of people who have passion for skateboarding will practice together, the formers will train the newcomers.
The players find it difficult in keeping balance on a board for the first time. It takes players several months to complete basic techniques including how to stop, change direction, and rotate boards while they spend three years to master obstacle overcoming techniques. Young people are not forced to follow any rules. Players can be more flexible, resistant, healthy and reduce stress after a hard-working day.
A twenty-three year old player, Dinh Huy, in District 12, shared that having already joined the Skateboarding for two months, he feels excited because he has made friends with more people at the same age. He remembered he insisted to join the group of skateboard players when he accidentally came across Gia Dinh Park. He almost learned techniques from the Internet and experience of the formers in the group.
From 2018 till now, roller-skating in open-space parks for improving health has been prevalent amongst children. Most of districts in Ho Chi Minh City have set up roller-skate clubs. Five -year-old boy Tran Minh Huy said that he was interested in roller-skating when he saw young sisters and brothers practice the sport. Though he has fallen down many times while practicing the sport, he did not cry but tried more to play. 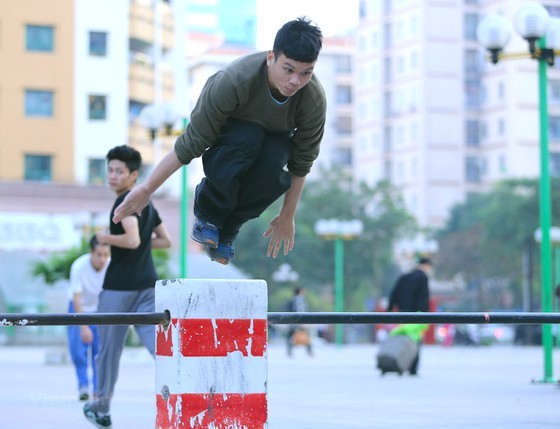 Skateboarding originating from Western countries appeared in Vietnam in the 2000s. Till now, the sport is familiar with dynamic young people who love challenges ; however, playing yard for skateboarding is limited.
From 5PM to 9 PM everyday in Gia Dinh park, members of Gia Dinh roller-skate club are absorbed in playing the sport. In the park, three-year-old children are trained by experienced coaches so that they can participate in sport events. Coach Trung said young children aged from 3 years old to 5 years old spend one month to stand on the roller-skate while adults spend one week or ten times; skaters will practice going up or going down sloping streets or skate obstacles next.
Entering Vietnam from 2007, Parkour - a training discipline using movement  developed from military obstacle course training - has become one of dangerous road sports which are appealing to young residents in Ho Chi Minh City and Hanoi. Parkour practitioners aim to get from one point to another in a complex environment, without assistive equipment and in the fastest and most efficient way possible. Parkour includes running, climbing, swinging, vaulting, jumping, plyometrics, rolling, quadrupedal movement (crawling) and other movements as deemed most suitable for the situation.
Parkour practitioners just need a good pair of shoes to play the sport. Parkour sport appeared in HCMC in 2013 attracting around 100 Parkour members. Twenty -five year old founder Tran Trung Hieu often gathered people in small groups before; yet, they now usually play on Sunday afternoons at Bach dang Wharf in District 1 or playing yard in Binh Thanh District.