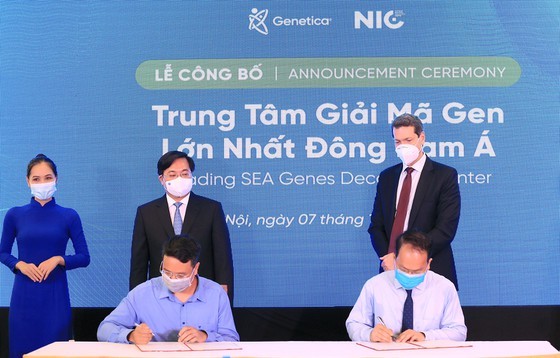 According to Genetica Co., the new gene decoding center in Vietnam is capable of decoding up to 500,000 gene packs per year, attaining the same standards like Clinical Laboratory Improvement Amendments (CLIA) and College of American Pathologists (CAP) as its counterparts in the US, while observing the Health Insurance Portability and Accountability Act (HIPAA) to obtain the most precise result possible.

The center is planned to enter its first operation stage in the fourth quarter this year, saving the effort of sending samples to its counterparts in the US to perform the task. This helps to reduce both experiment cost and waiting time to under 30 days in order to satisfy the gene testing demands not only in the nation but in the Southeast Asian region as well.

NIC’s Director Vu Quoc Huy highly appreciate the creation of a large-scaled gene decoding center in Vietnam to answer the request of the Planning and Investment Ministry as to promoting the growth of innovative startup ecosystems and the launch of research and development activities in the scientific community.

“The center will bring about giant leaps for gene research of Genetica Co. and its partners here in Vietnam, turning the country into an ideal destination for investments in innovative startups and creating a strong innovative startup ecosystem of the region”, said Director Huy.

Genetica Co., a gene decoding company founded by Cao Anh Tuan – a doctorate in Computer Sciene, working in Cornell University, has cooperated with Illumina and Thermo Fisher – two leading gene decoding organizations in the world – to build a chip for the decoding of polygenes especially for Asian people with the precision reaching over 99 percent.

It signed a collaboration contract with many hospitals like American International Hospital and Hong Ngoc Hospital to implement AI-based gene decoding in disease screening, greatly boosting the performance of this task and helping people actively prevent certain potential diseases.