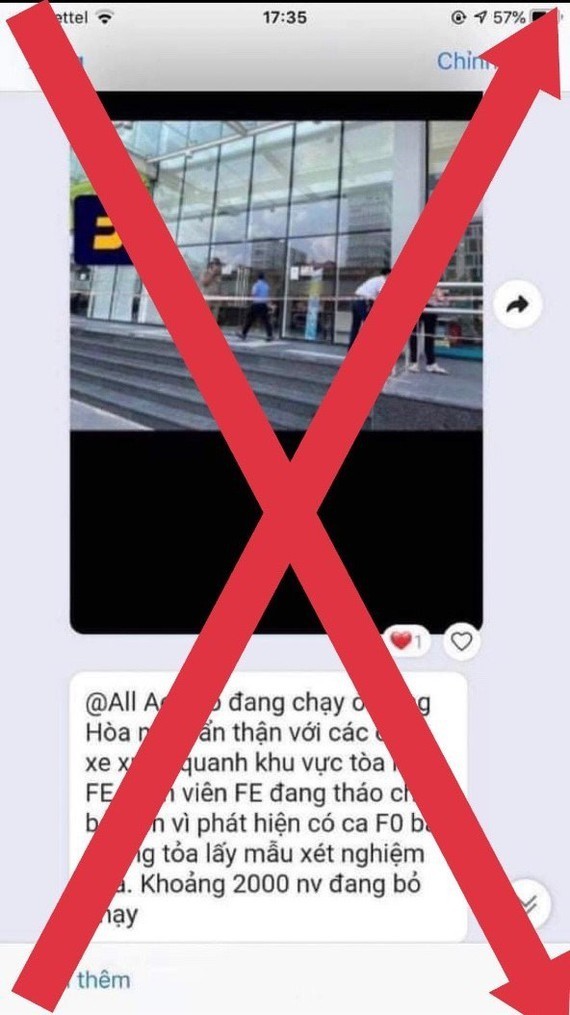 A piece of fake news lately appearing on the Internet

Vietnam Anti Fake News Center (VAFC) on July 19 announced that the image of ‘Covid-19 death bodies in HCMC’ is not a picture taken in Vietnam but in Myanmar. VAFC, therefore, warns that the public stop sharing that image for fear of misunderstanding.

Not long ago, while HCMC was still trying to furiously combat against Covid-19 in the latest outbreak, there appeared several fake news like on the Internet ‘citywide lockdown from July 15’, ’22-year-old Covid-19 patient died’, or ‘Vietnam will be the second India’. All of those news pieces have been then corrected by the authorities.

Statistics from the Propaganda Department of HCMC Party Committee, since July 1, there have been over 280 fake news pieces released by various websites, most of which are related to policies in the Covid-19 fight in the city and in Vietnam in general.

Even though this kind of fake news has no clear origin, which is not reliable at all, they, to some extent, have negatively affected the mind of the public, making the community more anxious and uncomfortable.

Secretary Nen stressed that it is high time the municipal authorities apply more effective propaganda campaigns to raise the awareness of city dwellers and stricter punishments to prevent similar harmful actions in the future. There must be a solution to deliver precise and updated news to the public timely.

In addition, the city should establish different channels to receive feedbacks, suggestions, and reports from residents to provide satisfying responses. Current hotlines like 1022 need to be more effective to earn the public trust.

Deputy Head of the Propaganda and Education Department of HCMC Party Committee  Le Van Minh proposed a solution that the press must become a formal channel to provide updated news on various fields, especially on the Covid-19 fight, to the community so that fake news can no longer bother them.

Experts of the field also stated that functional agencies should timely inform the press with their latest authentic news to post on their official websites, contributing to the elimination of fake news.

VAFC warns that when seeing any news on the Internet, people should first identify whether its source and author are reliable or not. They should also check if this is an outdated piece. Finally, asking for advice from professionals is also a wise step before putting their trust in that content.

When discovering fake or suspicious news, people must immediately report it to VAFC via its formal website tingia.gov.vn, its email at online.abei@ mic.gov.vn, or its hotline 18008108. The center is responsible for verifying that news and announces the result on its website. VAFC also imposes suitable punishments to those purposely spreading fake news.