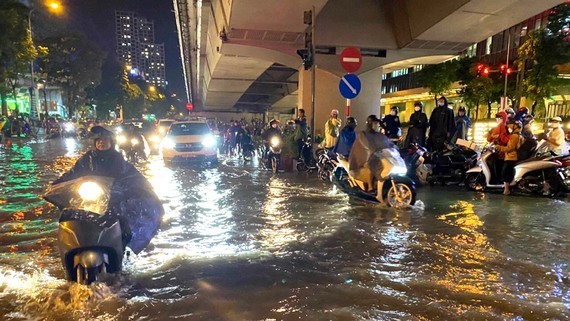 With too much rainfall this year, Hanoi continuously experiences urban flooding in May and June

General Secretary of Vietnam Meteorological and Hydrological Association Le Thanh Hai commented that the La Niña phenomenon in Vietnam will last at least until Tet Holiday of next year. Similarly, the National Center for Hydro-Meteorological Forecasting has confirmed that La Niña this time lasts longer than expected, and that the El Niño–Southern Oscillation phenomenon (ENSO) will maintain at the La Niña stage at least until the end of this year, which is longer than its usual duration of 2 years.

Opposite to extreme heat in European countries at present, Vietnam and many Asian nations are enduring serious flooding due to more heavy rain and less sunshine than usual.

These disasters are predicted to appear mostly in October and November, and will have the strongest influences on the Central Coastal region of Vietnam. This means more severe, heavy rainfall there. Meanwhile, the rainy season in the Central Highlands and Southern region will also be longer, maybe until December. The North will experience cold spells sooner than previous years.