The uprooted trees and landslides resulted in traffic congestion through the localities for several hours.

In the province of Ha Tinh, more than 42,000 pupils in two districts of Huong Son and Nghi Xuan in Ha Tinh Province have to be absented from their schools. Students in other localities had to switch to online study.

Throughout Thursday, some hydropower plants of Ban Coc, Chau Thang, Song Quang and Chi Khe in Quang Binh Province had to discharge floodwaters amid the extreme rainfall.

Due to the influence of the storm circulation, the North- Central region continues to experience thundery downpours. 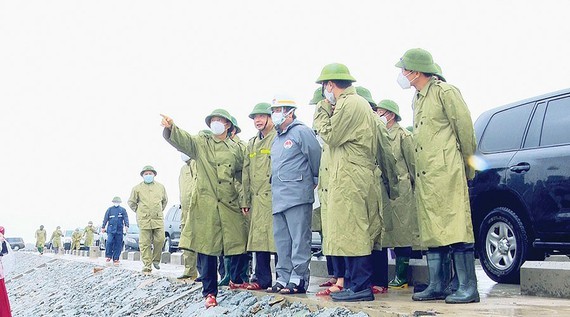 The minister said that many localities are situated in complicated and unpredicted weather and need to continue proactively implementing measures against disaster and minimizing damage of properties and people although typhoon Kompasu has weakened into a tropical depression before reaching the Vietnamese coast.
According to the National Center for Hydrology Meteorology Forecasting, the eighth storm downgraded to a tropical depression and a low-pressure zone in the coastal provinces from Nam Dinh to Thanh Hoa. Currently, a new low-pressure zone has just appeared.

From tonight to October 18, a tropical convergence range passing through the Central region connecting with an increasing cold spell is expected to bring heavy rainfalls along with the potential for flash floods, landslides and serious flooding.