Rare phenomenon of snowfall occurred in mountainous area of Y Ty in Lao Cai Province’s Bat Xat District as from the midnight of Sunday, impacting on life as well as outdoor production activities of people. Vegetable and seeding crops of local people were covered with ice and damaged significantly.

On the same day, the lowest temperature on the peak of Phia Oac in Cao Bang Province’s Binh Nguyen District plummeted to minus 10 degree Celsius, causing a phenomenon of frozen water and wind chill. Thousands of hectares of tree and forest have been frozen. 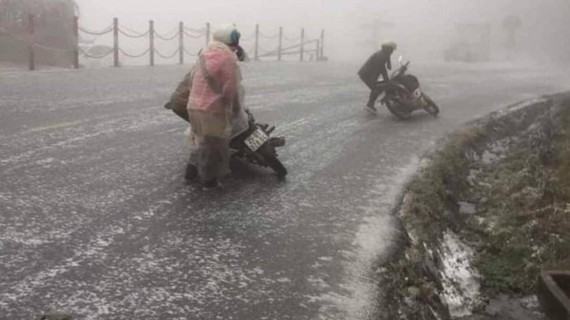 By January 11, the cold wave caused a damage of around VND1.4 billion (nearly US$61,000) for local agricultural sector.

Besides, the Northern Power Corporation informed that some transformer stations and power lines in areas of Phia Oac in Cao Bang Province, Mau Son, Y Ty have been enveloped with snow and ice.

According to the weather experts, Ho Chi Minh City, the Southern and Southeastern provinces and cities are forecast to maintain milder climate with slight sunshine and colder weather at nighttime and in the early mornings.

Meanwhile, Director of the National Center for Hydrology Meteorology Forecasting Mr. Hoang Phuc Lam predicted that temperature in the Red  River Delta would increase slightly as from January 12; however, the mountainous areas would be likely to continue to experience bone-chilling cold.

Yesterday, the Department of Education and Training of Quang Binh Province announced that more than 20,000 pupils were allowed to stay home due to temperature plummeting to below seven degrees Celsius in mountainous districts of Huong Hoa and Tuyen Hoa.