Due to an impact of over 5,000-meter upper-air wind convergence zone, the Northern region is expected to experience torrential rainfalls between 40 and 120 mm, risk of whirlwind, hail, cyclone and blustery winds.

Within the next couple days, medium- heavy showers could fall in several hours in some places of the Northern region, Thanh Hoa Province and the capital city of Hanoi.
This morning, rainy and thunderstorm continued across the northern part of the East Sea including the Paracel Islands, the south- East Sea including the Spratly Islands and territorial waters from Binh Thuan to Ca Mau Province. 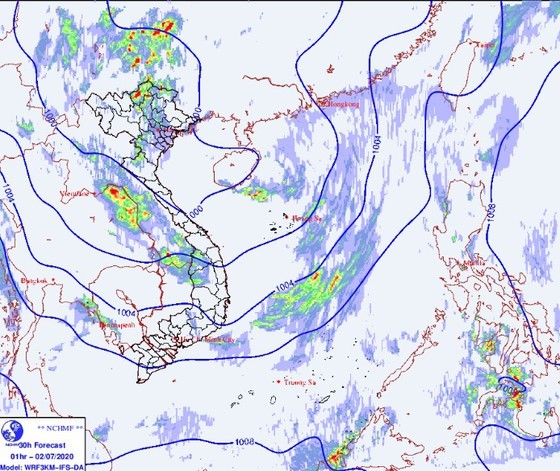 It is expected that the weather condition under newly- formed low pressure trough and powerful operation of the southwest monsoon would spread out territorial waters from Binh Dinh to Ca Mau, from Ca Mau to Kien Giang and the Gulf of Thailand, in the mainland of the South- Central, Central Highlands and Southern regions which may lead to risk of cyclone, hail and gusty winds.

The forecasters said that a low-hot pressure zone along with operation of hot and dry wind from Laos (Foehn) would bring over 39- degree Celsius temperature and humidity level between 30 percent and 50 percent across provinces from Thanh Hoa to Thua Thien- Hue.

From July 3, the hot temperature will tend to decrease gradually.