Molave is the most intense storm of 2020 on record and is expected to trigger prolonged flood and an extreme rainfall of 500 mm for many of days in the Central region, even it could swallow any vessels.

The supper storm is likely to enter the Central mainland provinces and cities from Da Nang to Phu Yen through October 28.

The updated weather news from the National Hydrology Meteorology Forecast Center showed that the tropical storm entered the East Sea at 9am on October 26.

As of this morning, Molave fizzled at approximately 650 kilometers north- northeast of Southwest Cay islet with its sustained winds of 135 kilometers an hour.

It is expected to move westward and strengthen over the next 24 hours with maximum wind speed touching 25 kilometer per hour. 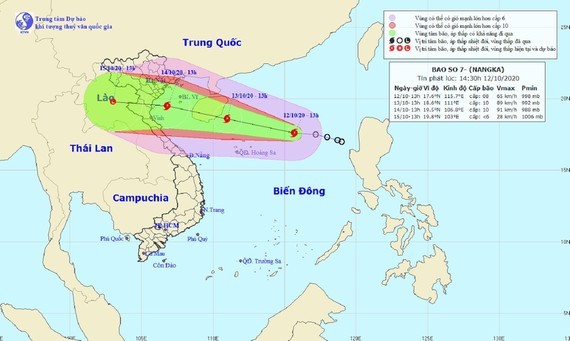 By tomorrow morning, the storm is likely to fizzle at around 270 kilometers north of Southwest Cay islet.

In the next 48-72 hours, it will veer to west-northwestward at a speed of 25 kilometers an hour and travel the mainland provinces and cities from Da Nang to Phu Yen.

Due to an impact from the storm, the northern part and middle of the East Sea including both southeast of the Paracel Islands and north of the Spratly Islands will see blustery winds, big waves of up to 10 meters and rough sea.

Amid the current weather condition, Vietnamese Prime Minister Nguyen Xuan Phuc urgently worked with the Central Steering Committee for Natural Disaster Prevention and Control and the National Hydrology Meteorology Forecast Center this morning to prepare for any contingency from the super storm.