Additionally, it is necessary to immediately perform the inspection, review and plan of natural disaster prevention and control across the country, contributing to ensuring safety and reducing risks amid natural disasters; and to release safety assessment, promptly detect and have measures to overcome incidents and damaged dykes, dams, traffic works during the rainy season.

The Deputy Prime Minister highlighted the improvement of consultant, direct, regulation, mobilization and coordination to combat the natural disaster development to minimize damage caused by natural disasters, the loss of life and property in 2022.

These were the conclusions of Deputy Prime Minister Le Van Thanh, Head of the National Steering Committee for Natural Disaster Prevention and Control, Head of the National Committee for Natural Disaster Response and Search and Rescue at the national conference on natural disaster prevention and control, search and rescue in 2022. 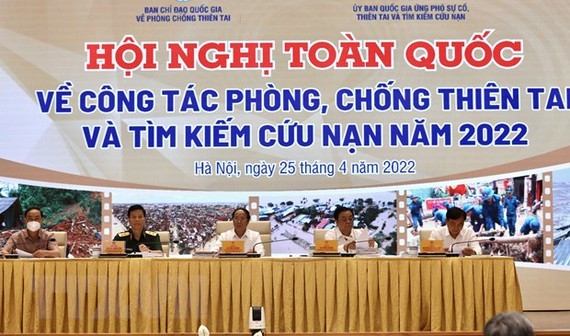 According to the National Center for Hydrology Meteorology Forecasting, it is forecast that about 10-12 typhoons and tropical depressions will form in the East Sea in this year’s stormy season.
Recently, untimely downpours, floods with the appearance of thunderstorms, whirlwinds and big waves hitting the Central provinces from Quang Binh to Khanh Hoa during the dry season were a sign of weather anomalies. The natural disasters caused total damage of VND 2,400 billion (US$105 million) from January to now.

In the related news, the National Center for Hydrology Meteorology Forecasting issued a warning of a scorching temperature of up to 39 degrees Celsius over the North- Central, Mid-Central and northwestern regions from April 26.

The meteorologists also released a warning of thundery rain spells over the Central region on the upcoming holidays, falling on April 30 and May 1.