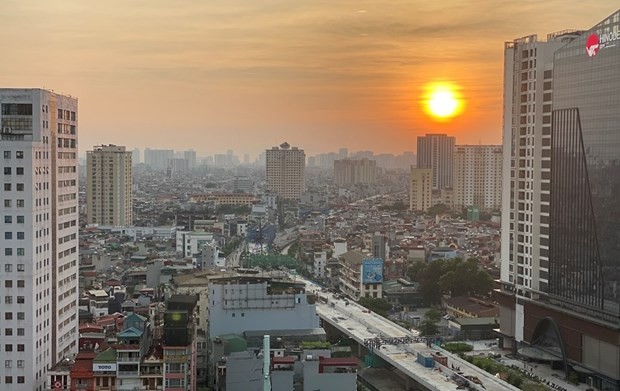 The heat wave in the northern and central regions is likely to reach its peak on April 25 - 27. (Photo: VNA)
On April 24, the heatwave began spreading across the north, mountainous areas of the northern central region, and coastal places.
Its peak is predicted for April 25 - 27, when temperatures will reach 35 - 37 degrees Celsius in lowland and western areas of the north, even over 37 degrees in some places of Hoa Binh province. In the north-central region, they could be as high as 35 - 37 degrees, even 38 degrees or higher in mountainous areas.
The heat will gradually abate in the following days, the center said.
It also warned about downpours, gales, lightning, and whirlwinds in the late afternoon of the days.
This year, heatwaves in the northern and central regions are likely to appear later than average and not too severe or long.
Temperatures in the north will approximate the previous years’ average during May - July but be 0.5 - 1 degree higher in August and September, the center forecast.
Meanwhile, strong winds and rough seas with waves 1.5 - 3 meters high are projected for the Gulf of Tonkin in the afternoon of April 24 - 26 as a result of a western low-pressure area’s impacts.
Facing this, the Standing Office of the National Steering Committee for Natural Disaster Prevention and Control on April 24 sent a document to the coastal localities from Quang Ninh in the north to Quang Binh in the central region, requesting them take action in response to the bad weather at sea.