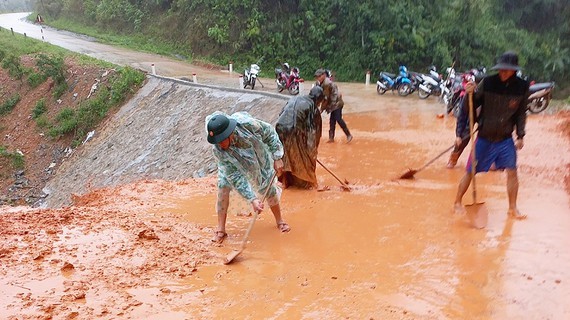 The funtional forces and people clean up a mass of fallen mud on the road surface.
The functional forces also helped people move household appliances from flood shelters to their homes, repair damaged water pipes and collapsed houses, stabilize their lives.

Currently, the border guards are coordinating with police forces and people to search for still missing after the flood occurred on the evening of October 16.

On the same day, Quang Nam Province’s Phuoc Son District mobilized all forces and means to clean up soils and rocks on roads in areas of Phuoc Kim, Phuoc Loc, Phuoc Thanh and Phuoc Chanh communes after the downpour- triggered landslides.

According to the Steering Committee for Natural Disaster Prevention and Control, Search and Rescue of Quang Binh Province, around ten communes of Quang Ninh and Le Thuy districts were submerged and isolated by floodwaters on Tuesday.

In the early morning of October 19, a landslide occurred in mountainous area of Keo Te Village, Nhi Son Commune, Muong Lat District, Thanh Hoa Province. A part of the National Highway 15C was buried by soils and rocks, causing serious traffic congestion. Amid the worse development, the functional forces had to promptly evacuate two households from Cha Khot Village to safe place.

On the same day, the People’s Committee of Thanh Hoa Province issued an emergency disaster, urgently implemented the building a centralized resettlement area severing people evacuation at the potential for landslides.

The Vietnam Red Cross Society decided to promptly give support to residents affected by rain-triggered flood in Quang Binh Province with total value of VND320 million (US$14,000), including VND200 million (US$8,000) in cash and 200 boxes of essential goods and foodstuff.

The above financial and goods support will be sent to households having injured people, damaged houses and vegetable crops and needy families with disable people or lonely old ones.