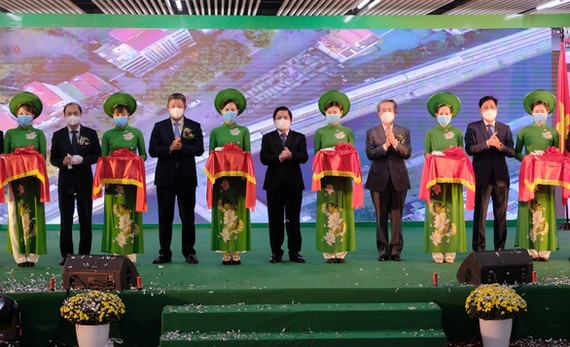 At the inauguration ceremony (Photo: SGGP)
Deputy Chairman Quyen made the announcement this morning at the inauguration ceremony of the Cat Linh - Ha Dong urban railway organized by the Ministry of Transport, in coordination with the Hanoi People's Committee and the Chinese Embassy in Vietnam.
The country’s first metro line transports an average of nearly 15,000 passengers per day. After many delays,  the project was put into operation on November 6, 2021.
Due to the complicated development of the Covid-19 epidemic, passengers experiencing on the metro line has decreased. However, passengers who need to use it to go to work or study regularly on the route with monthly tickets tend to increase from 10 percent to 20 percent now and would rise further when more schools and universities reopen, he said.
At the inauguration ceremony, Chinese Ambassador to Vietnam Xiong Bo congratulated the official operation of the Cat Linh - Ha Dong metro line thanking the management bodies and contractors in two countries.
The Cat Linh - Ha Dong urban railway project was started construction on October 10, 2011. This is one of eight urban railway lines of Hanoi approved by competent authorities.