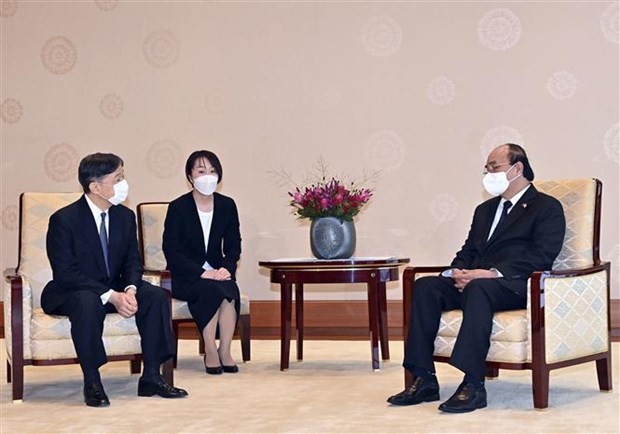 President Nguyen Xuan Phuc (R) meets with Japanese Emperor Naruhito in Tokyo on September 28 (Photo: VNA)
The Vietnamese leader expressed his deep condolences over the death of Abe, highlighting the former PM’s special sentiment, dedication, and efforts to promote the countries’ friendship, especially the upgrade of bilateral ties to the Extensive Strategic Partnership for Peace and Prosperity in Asia in 2014, which Mr. Phuc described as a precious heritage needing to be upheld and promoted.
He highly valued the vigorous, comprehensive, and substantive development of the extensive strategic partnership in all fields, increased people-to-people exchanges, and mutual assistance in trying times, especially amid the Covid-19 pandemic.
President Phuc appreciated support from Japan, which was the first country to donate Covid-19 vaccine and medical supplies to Vietnam to help with the pandemic response.
He also extended an invitation from Party General Secretary Nguyen Phu Trong and himself to the Japanese Emperor and Empress to visit Vietnam on the occasion of the 50th anniversary of diplomatic ties in 2023. He held that the visit will hold significant importance to the countries’ relations.
Expressing his delight at the thriving relations, Emperor Naruhito affirmed that he attaches great importance to the Vietnam - Japan friendship and will do his utmost to contribute to bilateral ties.
He also underlined the importance of enhancing mutual trust and understanding between the two peoples through cultural and people-to-people exchanges, particularly in the year marking the 50th anniversary of diplomatic relations.