The ministry said since the pandemic broke out, Vietnam has received valuable support from people and Governments of foreign countries, as well as international organisations.

The medical supplies have helped the country sail through waves of Covid-19 outbreaks, it noted.

Given the complex developments of the pandemic, the Vietnamese Government has considered vaccine access and widespread inoculation a crucial, urgent solution.

Therefore, Vietnam has stepped up “vaccine diplomacy,” with the engagement of Party, State, Government and National Assembly leaders, and ministries, and agencies.

Such efforts paid off as the country has received the warm response from partners, neighbours and international friends that have committed up to 150 million doses of Covid-19 vaccines, despite a global shortage of vaccines.

The partners have also pledged to further aid the Southeast Asian nation in the time ahead.

Other countries like India, the UK, Australia, Cuba and Germany have also made specific commitments to donations and cooperation in the transfer of vaccine production technology.

The United Nations Children’s Fund (UNICEF), and countries like Laos, Japan, the Republic of Korea (RoK), Australia, Germany, Cambodia and Saudi Arabia have also provided Vietnam with medical supplies and sources to serve the pandemic combat. 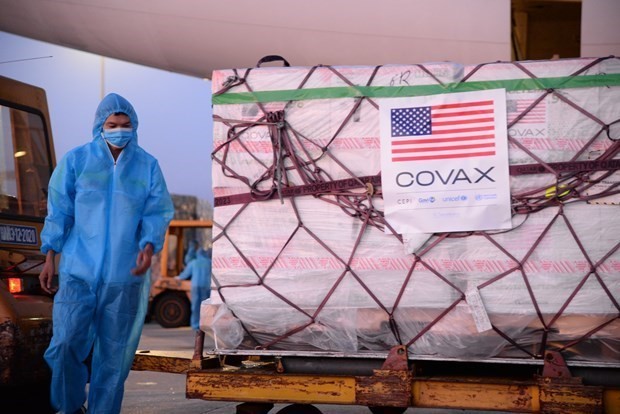 A batch of Moderna Covid-19 vaccine supported by the US Government at Noi Bai International Airport in Hanoi on July 10. (Source: WHO)

Vietnam is rolling out its largest-ever inoculation campaign. As of July 20, more than 4.3 million people have been vaccinated, of whom over 300,000 got full two shots.
According to the ministry, the Vietnamese leaders have thanked the valuable support during their meetings and online talks, and in letters to foreign leaders, saying it demonstrates the fine relations between Vietnam and partners and international friends.

At the same time, Vietnam has joined hands with the international community in the combat through cooperation activities and the exchange of experience and sources.

The country has contributed US$500,000 to the vaccine sharing scheme COVAX.