At the meeting, Director of the National Hydrology Meteorology Forecast Center Mai Van Khiem informed that Saudel had entered the East Sea to become the eighth storm in this year’s stormy season. 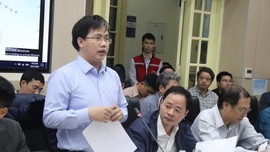 As of this morning, Saudel was fizzled at around 680 kilometers far from the Paracel Islands with sustained winds of level 8-11.

The tropical storm is expected to affect directly the mainland provinces of Vietnam, bringing heavy rainfalls of 200 to 300 mm, from the midnight of October 24.

Risk of landslides in the Central provinces and cities could happen at any time as the eight storm makes landfall.

He also asked the Central Steering Committee and the National Committee for Natural Disaster Response and Search and Rescue to send functional forces to support the flood-hit people via using canoes and helicopters for relief and rescue operations .