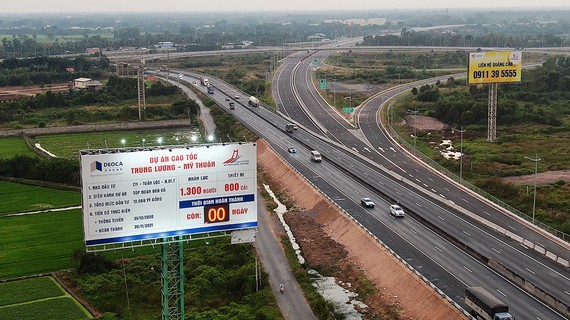 According to the SGGP Newspaper’s reporter, the final works of guardrail, lighting system installation and rural roads under the construction on the Trung Luong- My Thuan expressway are set to finish.
As for the section connecting Tan Phuoc District to Than Cuu Nghia intersection, the construction unit is pouring soil and stone for the road surface.

The one-way expressway from Ho Chi Minh City to the Mekong Delta localities through this interaction was connected smoothly meanwhile the pathways connecting to interactions of Cai Lay and Cai Be have not opened to traffic.

During the operation, staff of the Trung Luong - My Thuan Expressway Operation Center will coordinate with the functional agencies of Tien Giang Province to be on duty for regulating traffic and promptly handling incurred incidents.

The Road Administration Department IV will coordinate with the traffic police force to build a temporary exploitation plan to ensure traffic safety.