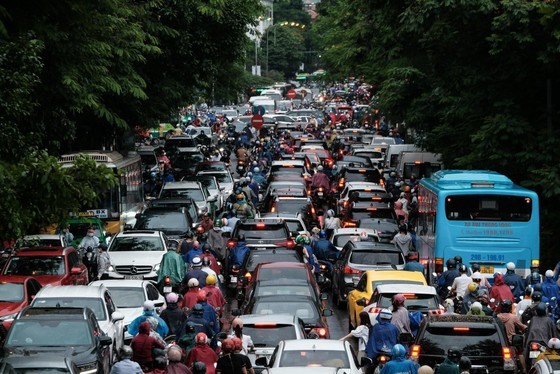 Traffic jams are seen in Hanoi this morning

Traffic jams are seen in Hanoi this morning
Due to the effects of the tropical depression, there were strong winds of level 6 in Bach Long Vi island of Hai Phong City and gusts of level 8 in Co To island in Quang Ninh Province and gusts of level 6 in Phu Lien District in Hai Phong City.
According to the National Center for Hydro-Meteorological Forecasting, the downpour had been continuous and torrential in the Northeast provinces and Thanh Hoa. For instance, Phu Duc District of Thai Binh Province had a rainfall of 176.6mm, the Co To island of Quang Ninh with 170.3mm, An Thi in Hung Yen Province with 158mm, Ba Sao in Ha Nam Province with 158mm, Huong Son in Hanoi with 55mm, Hai Trieu in Hung Yen Province with 150mm on the night of August 10.
It is forecasted that in the next six hours, the tropical depression will move mainly in the northwest direction at 15-20km per hour, going deep into the mainland of the northern provinces and gradually weaken into a low-pressure area. The strongest wind in the center of the low-pressure area dropped below level 6 (or below 39km per hour).
The National Center for Hydro-Meteorological Forecasting also issued warnings of strong winds and big waves at seas. This morning, the Gulf of Tonkin area (including Co To and Bach Long Vi islands) also had strong winds of level 6 with gusts of level 8 and wave height increasing to approximately 2.0–3.0 m plus rough seas.
From August 11 to August 12, the Northern region, Thanh Hoa and Nghe An have heavy rain and thunderstorms; some places will experience heavy rain with a common rainfall of 70-150mm or over 200mm. Meteorologists warned that Hanoi will have heavy rain with strong gusts of wind with common rainfall from 50-100mm, some places over 120mm. 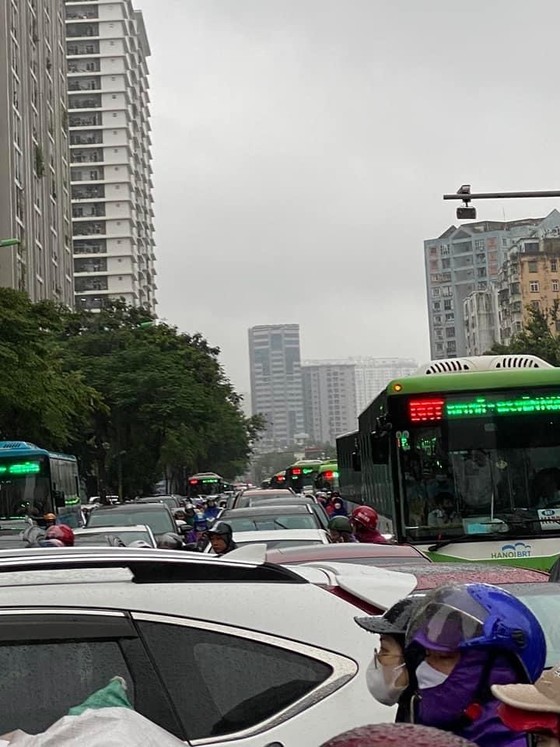 Traffic jams are seen in Hanoi this morning
Although the storm No. 2 has weakened into a tropical depression, it this morning caused heavy rains in the capital city of Hanoi, Hai Phong, Quang Ninh, and Hai Duong provinces. Worse, many roads in Hanoi were seriously congested.
Rain drenched Hanoi all night until this morning. Many roads in Hanoi have been submerged in floodwater. Heavy rain caused serious traffic jams at the entrance to the inner city.
Along roads Le Van Luong - Hoang Dao Thuy, Hoang Quoc Viet - Pham Van Dong, Tran Duy Hung, Pham Hung, Le Quang Dao, long queues of vehicles got stuck in traffic jams. Many drivers could not continue to move; they resorted to parking in alleys to wait to move out of the jam. 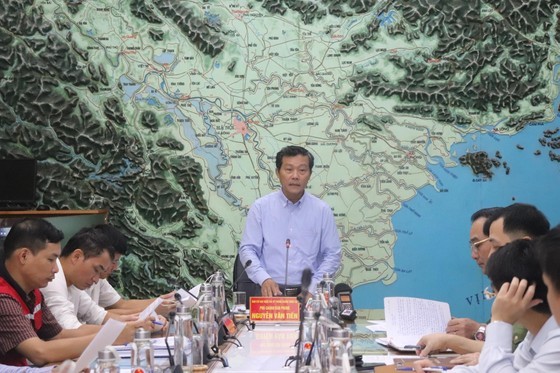 At the morning meeting of the National Steering Committee
At the morning meeting of the National Steering Committee on the storm circulation causing heavy rain, related agencies reported no records of human loss and property damage caused by the storm.
However, strong winds in the coastal areas of Quang Ninh and Hai Phong and heavy rains in the North are likely to pose a threat to coastal activities and increase the risk of flash floods and landslides.
To be ready to cope with storm circulation and tropical depression, the northern mountainous provinces and the Central Province of Nghe An have prepared plans to evacuate more than 114,000 people in high-risk areas of flash floods and landslides to safe shelters. Guards are being stationed at more than 2,000 high-risk locations for landslides and floods.
Border guards and military units in the northern mountainous area are ready to prepare vehicles such as amphibious vehicles and canoes to ensure traffic in flooded areas and perform rescue tasks.