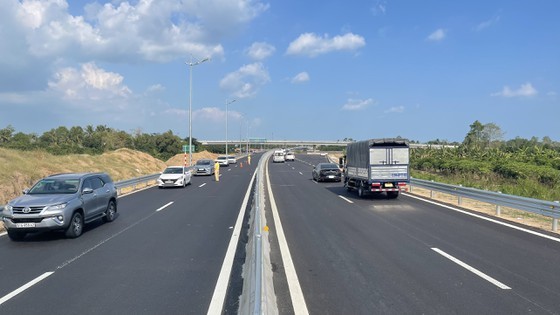 There are four toll stations on the expressway, including Than Cuu Nghia, Cai Lay, Cai Be and An Thai Trung. Each station has four to six lanes using automatic non-stop toll collection.
Vehicles stamped with a Continuous Toll Collection (ETC) card and an eligible transaction account will be allowed to enter all toll lanes. The automatic recognition system and barriers will let vehicles access.
In case the card stamped on the vehicle can not be recognized by the system, the toll station’s officer will issue an IC card to the driver.
Vehicles that do not have an ETC card and an eligible transaction account will enter into the mixed toll lanes. Drivers will be asked to press a button to receive an IC card from an automatic card issuance machine and return it to the toll booth staff at the exit of the highway.
Under the toll rate proposal, vehicles with fewer than 12 seats, trucks under two tons and buses will be collected from VND2, 100 – VND108, 000 per trip. Vehicles with 12-30 seats, and trucks from two to less than four tons will pay VND3, 000 – VND154, 000. Passenger cars with 31 seats or more; and trucks from four to under ten tons are required to spend VND3, 700 – VND190, 000 per trip. A ticket for a truck from 10 to under 18 tons and 20 feet container truck will be VND309, 000; and a vehicle from 18 tons, 40 feet container truck will cost VND432, 000.
The People’s Committee of the Mekong Delta province of Tien Giang and BOT Trung Luong- My Thuan Joint Stock Company held an inauguration ceremony of the Trung Luong-My Thuan expressway on April 27.

The four-lane road has a total length of 51.5km connecting Than Cuu Nghia and An Thai Trung intersections in Tien Giang Province. The project has a total investment of more than VND12,688 billion (US$552 million). Vehicles can travel at a speed limit of 60-80km/h. Others not allowed in the expressway consist of specialized motorbikes with a speed design of below 70km/h, motorbikes, dilapidated and outdated motor vehicles, walkers, animals, and chain wheel excavators.