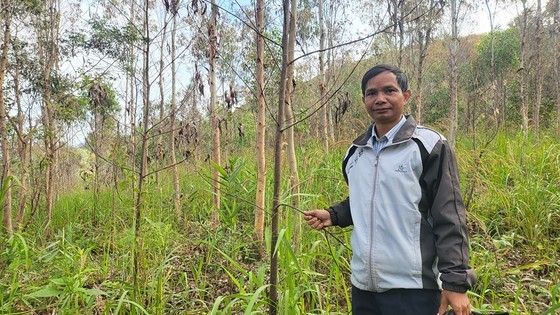 Acacia plantation forests in Lo Pang Commune have been gradually dying. (Photo: SGGP)
From July to September, the people of Blen Village in Lo Pang Commune in Mang Yang District of Gia Lai Province set out to plant forests in sub-zone 532. The village community has planted 11.5ha of acacia trees. However, despite being newly planted, most of the acacia trees have died. Mr. Dinh Kai, Vice Chairman of the People's Committee of Lo Pang Commune, said that in the past, the area where Blen villagers afforested was a bare hill, but now, a lot of trees grown there have died. The reason is that the planting time is late, and the planting site is located at an altitude of over 1,000m above sea level, so it is affected by wind and hoarfrost. About 6km from the above position down to Lo Pang Commune, SGGP’s reporter also discovered another plantation site with many dead acacia trees. This plantation forest intercrops two types of trees, including 4-year-old eucalyptus trees and 2-year-old acacia trees. While the eucalyptus trees develop well, several acacia trees from 1.5m to 2m high have died. According to local people, this forest area was planted by individuals, but the vegetation clearing was not done carefully, so the fire killed the trees.

Mr. Krung Dam Doan, Vice Chairman of the People's Committee of Mang Yang District in Gia Lai Province, said that many plantation forests in De Ar and Dak Troi communes in Mang Yang District, trees also did not develop because they were planted on dipterocarp forest with unsuitable soil. In Duc Co District, Mr. Nguyen Quoc Tu, Head of the district's Department of Agriculture and Rural Development, informed that according to statistics, the underdeveloped forest area is about 8 hectares, located in Ia Pnon Commune, planted in 2017 and 2018. “For a long time, people bought saplings by themselves, so they did not research carefully, and many trees did not meet quality standards. As a result, people buy low-quality acacia saplings, leading to a poor survival rate. Therefore, the unit hopes that the authorities will have the plan to buy saplings and provide them to local people," said Mr. Nguyen Quoc Tu.

According to the report of the delegation of the People's Council of Gia Lai Province, there are currently no units or organizations that study specific climatic and soil conditions of each region to recommend or purchase and supply quality saplings for the people. Therefore, this agency recommends the provincial Department of Agriculture and Rural Development strengthen the quality management of cultivars; continue to review, evaluate specifically, and identify each cultivar with sufficient records to prove its origin and suitability to the soil and climatic conditions of each region, especially the cultivars suitable for semi-flooded areas of irrigation and hydroelectric projects to orient people to participate in afforestation to ensure efficiency.

Inspecting afforestation at the Protection Forest Management Board of Dak Doa

The Department of Agriculture and Rural Development of Gia Lai Province has been inspecting the use of funds for forest environmental services for afforestation in 2020 at the Dak Doa Protection Forest Management Board. Previously, through checking the plantation forest area of 33.1ha grown in 2020 of this unit, the authorities found that the tree density was only 10 percent due to poor care and management shortcomings related to the collective and individual responsibilities.