President Nguyen Xuan Phuc, Chairwoman of the municipal People’s Council Nguyen Thi Le and other candidates in constituency No.10 meet local voters on May 10 . (Photo: SGGP)
In presenting his programme of actions if he is elected to the 15th NA, President Phuc pledged to do his best to serve the country and the voters at the constituency.
The focus of Phuc’s action plan is to fulfill the responsibility of a representative of the people, including keeping close contact with the people and listening to their aspirations in order to promptly report to the legislature and competent agencies.
The State leader vowed to push the implementation of the city’s four development programmes, especially technological transfer, labour and employment. 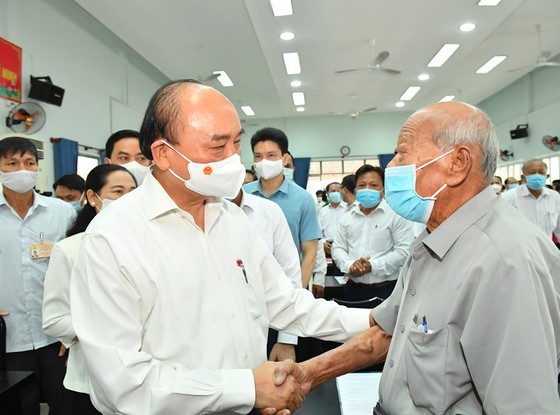 President Nguyen Xuan Phuc meets local voters in Hoc Mon District. (Photo: SGGP)
Voters spoke highly of the candidates’ action plans, saying that they meet public expectations and reflect their sense of responsibility for the development of the locality and the city.
They suggested the candidates work to attract more capital to the city for job generation, and promote high-tech and service projects, particularly infrastructure such as ring roads.
In the afternoon the same day, Phuc met with voters in Brigade 317 based in Hoc Mon district.