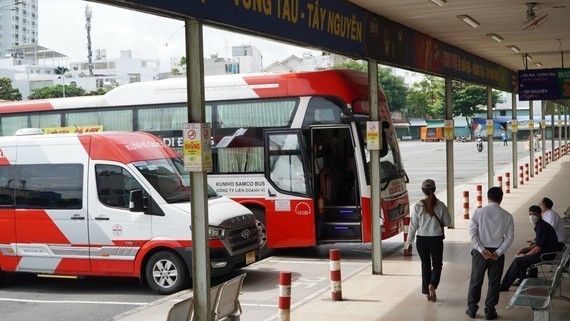 Mr. Tran Bao Ngoc first mentioned a few reasons for the situation of coaches preferring to stop at illegal stations rather than official ones, the most prominent of which comes from legal regulations.

In the Law on Road Traffic 2008, there are 5 types of passenger transportation vehicles, namely coaches for fixed routes, buses, taxis, coaches under travel contract, and coaches for tourism purposes. This classification is outdated now, leading to much trouble for the State’s management tasks and unhealthy competitions among passenger transport companies.

Another reason is the limited number of official coach stations, not to mention their inconvenient location much away from the downtown. In addition, due to the effects of the Covid-19 pandemic, the travel habits of citizens have changed a great deal, leaning towards private vehicles instead of public transport. This results in the bloom of contracted passenger vehicles with small capacity of 7-16 seats.

Mr. Bao Ngoc affirmed that there is a legal corridor to punish law violations regarding unlicensed coaches or illegal stations, with clear identification of the responsibilities of the local authorities and functional agencies. However, since the inspection of these state units are not frequent enough, that problem can only be temporarily stopped and reappear a short time later.

Discussing possible measures for the local authorities to adopt to effectively cease such illegal activities, he stressed that the People’s Committees of all provinces and cities need to request their Transport Departments to work with functional agencies for regular checking and preventing the appearing of the disordered transportation situation in their area.

By 2030, existing stations should be kept in the inner city rather than being transferred farther in order to maintain the stability in transportation and offer more convenience for passengers. Any cases of exceeding the power of a Transport Department, this unit should report to the Prime Minister or the respective Ministry.

Moreover, each Transport Department must organize and regulate the traffic flows to offer legal terminals for passengers picking up and dropping off. These units must also review the traffic signs that prohibit passenger vehicles (except those for fixed routes and buses) from entering the areas surrounding coach stations.

Another feasible solution is to organize connecting bus routes among stations, while creating favorable conditions for passenger transport companies to invest in transit vehicles for passenger picking up and dropping off at regulated sites. Coach stations should save space for taxis and 2-wheeled taxis.

Finally, any individuals using their private vehicles for passenger transport purposes via the use of social networks (Zalo, Facebook, etc.) must be strictly punished.

Answering the question about the responsibilities of the Transport Ministry for handling inadequacies in passenger transport activities, Head Bao Ngoc said that in the upcoming time, this Ministry is going to propose budget allocation for the development of an IT system to manage transportation business activities nationwide, as regulated at Decree No.10/2020/ND-CP on conditions for doing transport business by automobiles.

This system is expected to closely monitor the situation of the whole country, fight against tax evasion, ensure transparency and fairness in competition among passenger transport companies. The Transport Ministry will instruct associated ministries and state agencies to cooperate with one another in checking and handling transport-related problems, especially the use of the Internet to advertise for illegal transportation activities.

Meanwhile, the Transport Ministry continues to review legal documents for adjustments in order to encourage passenger transport activities via buses and coaches for fixed routes. In the long term, there will be a reclassification of passenger transport modes for a healthier, fairer, more transparent business environment.

Lastly, policies to develop coach stations into multi-function hubs to attract investments will be considered in the near future.