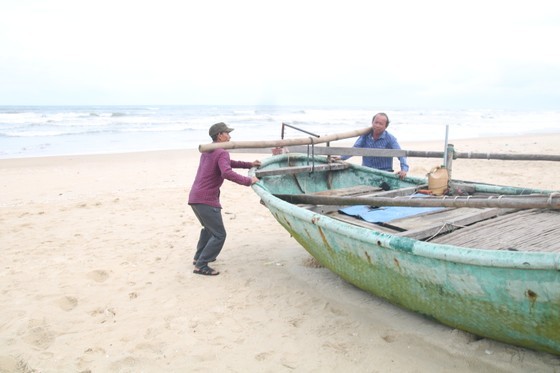 The evacuation of people must be completed before 9 a.m. on September 27, ensuring food and essential needs at the shelter.

Quang Nam Province has planned to relocate people and tourists in two scenarios, a strong storm, and a super typhoon. As for the former situation, the province will relocate 182,280 people. Of these, 57,753 will be relocated on the spot, and 124,700 will be moved to safe places.

The provincial Border Guard Command and coastal localities have banned ships from going to sea from September 26, including all inshore boats and vessels. The ban is valid until the sea weather returns to normal. At the same time, they must not let people stay on ships, boats, or floating cage fish farms and must complete before noon on September 27.

Quang Nam Provincial Steering Committee for Disaster Prevention and Control and Search and Rescue said that 85 vessels with 2533 fishers still operate at sea in the province. Of these, 18 fishing boats with 213 fishers are in dangerous areas.

According to a quick report, the total number of fishing boats of Quang Nam Province operating at sea is 87 ships with 2533 fishers. All boats have been notified of Typhoon Noru.

In the Paracel Islands area, there are 28 ships with 290 people. Among these, 18 ships with 213 people in dangerous areas are moving to a safe place. In the Spratly Islands area, 59 vessels with 2243 workers are in the safe zone.

Along with that, the province's aquaculture area is about 650ha of saltwater and brackish water. Farmed aquatic products have been harvested by about 85 percent, and the rest is still being collected to avoid the storm.

On the morning of the same day, Mr. Thai Viet Tuong, Director of the Department of Education and Training of Quang Nam Province, said that the department had just decided to let students stay home to avoid Typhoon Noru. Accordingly, affiliated units must request students at all levels in the province to stay at home on September 27.

They must also deploy measures to protect schools and classrooms from the storm.

Especially, in low-lying areas and places that may be affected by floods, the head of the unit should warn and direct students and parents to prevent flash floods, river floods, and landslides. It is necessary to ensure safety in travel to avoid damage to people and properties.