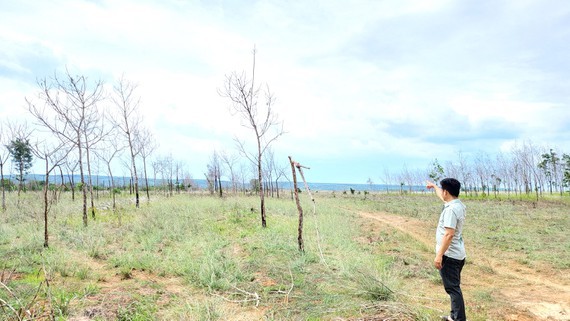 Since 2008, Gia Lai Province has permitted about 16 enterprises to carry out 44 projects to grow rubber on poor natural forest land with a total area of more than 32,000 hectares. Of which, the rubber tree area is more than 25,500ha. However, after planting, rubber trees died in mass.

Visiting a rubber plantation converted from exhausting forests of Quang Duc Company in Ia Pnon Commune, we witnessed that many rubber areas had died. On other hills, rubber trees are still alive but stunted. Although rubber trees have been grown for more than ten years, their trunks are only as big as a bicep.

According to an official of Ia Pnon Commune, at first, the project was carried out by another unit and later handed over to Quang Duc Company. Among 850 hectares converted to rubber plantations of the project, about 100 hectares remain, but the rubber trees are underdeveloped. Most of the remaining rubber area is dead or burned. In the area of dead rubber trees, there was a time when the unit leased the land to local people to grow melons, but it was not effective either.

In recent voter meetings, voters of Duc Co District had repeatedly asked the Gia Lai Provincial People's Committee to direct departments to inspect and evaluate the effectiveness of using the land fund leased to Quang Duc Company to soon take appropriate handling measures to avoid improper and ineffective land use in a long time.

Similarly, in Ia Mo Commune, Chu Prong District, Gia Lai Province, many rubber areas converted from exhausting forests have also died. It is recorded that the rubber area in Ia Mo Commune is managed by many units. However, most rubber trees develop slowly, and enterprises lend a large part of the area to people for agricultural cultivation.

In the communes of Ia Ga, Ia Lau, Ia Me of Chu Prong District, and Ia Blu Commune in Chu Puh District, rubber is also dead and underdeveloped. Mr. Dinh Van Dung, Secretary of Chu Prong District Party Committee, Gia Lai Province, said that in the district, the area of exhausting forest converted to rubber plantation is very large, about 11,000ha. These areas are mainly concentrated in the communes of Ia Mo, Ia Lau, Ia Pior, Ia Me, and Ia Puch.

The death and underdevelopment of rubber trees planted on exhausting forest land were inspected and discovered by the Gia Lai Provincial People's Council in 2015. The cause was determined to be due to rubber trees being planted in lowland, flooded areas, and unsuitable soil in some areas. In addition, there is another reason that the project implementation unit is still subjective and hasty. The enterprise which made the project only cares about land allocation, so the survey on soil conditions for rubber cultivation has not been thorough, leading to some land areas unsuitable for rubber cultivation.

According to Gia Lai Forest Protection Department, of the total of about 25,000 hectares of rubber trees, 12,039 hectares of dead and underdeveloped rubber trees are allowed by the Government and the Ministry of Agriculture and Rural Development to change the plant structure to other plants. Currently, enterprises have been organizing trial planting of some other crops suitable to the soil and climate conditions in the region as a basis for making a crop conversion project.

“In the coming time, when enterprises make reports on successful trial planting of crop restructuring models on dead and underdeveloped rubber areas, the Department of Agriculture and Rural Development will coordinate with other departments and localities to check and evaluate the success of the models and guide businesses to set up projects to change the structure of crops according to regulations," a leader of the Department of Agriculture and Rural Development of Gia Lai Province said.

Recently, the People's Committee of Gia Lai Province has also proposed the central government convert dead and underdeveloped rubber areas into other crops. However, according to the Ministry of Agriculture and Rural Development, rubber trees have not shown efficiency. However, to switch to other crops, it is necessary to take into account suitable soil, climate, and market demand. Thereby, enterprises can come up with an effective conversion model, avoiding repetitive waste.