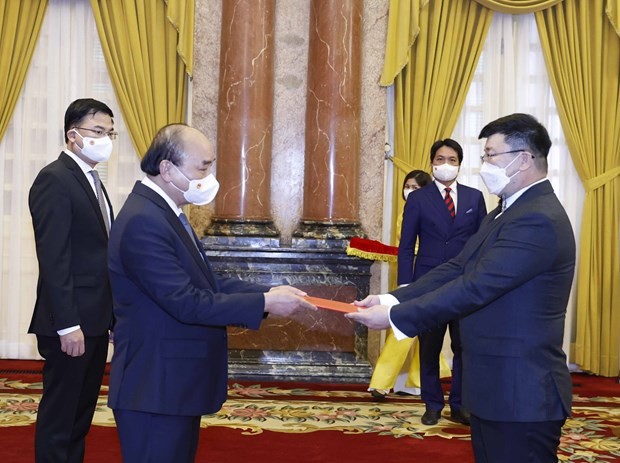 Mongolian Ambassador Jigjee Sereejav (R) presents his credentials to President Nguyen Xuan Phuc on December 23 (Photo: VNA)
Talking to Mongolian Ambassador Jigjee Sereejav, the Vietnamese President asked the two countries to accelerate the signing of a memorandum of understanding on economic and trade cooperation, facilitate their products' access to each other’s markets, and open a direct air route early so as to enhance economic, trade, and tourism links and raise bilateral trade to US$100 million in the near future.
He asked Mongolia to continue supporting ASEAN and Vietnam’s stance on the peaceful settlement of disputes in the East Sea. He affirmed that ministries and sectors of Vietnam will help the ambassador fulfill his duties during his term in the country.
In response, the diplomat pledged utmost efforts to help strengthen the traditional friendship between the two countries, particularly in economy and people-to-people exchange. 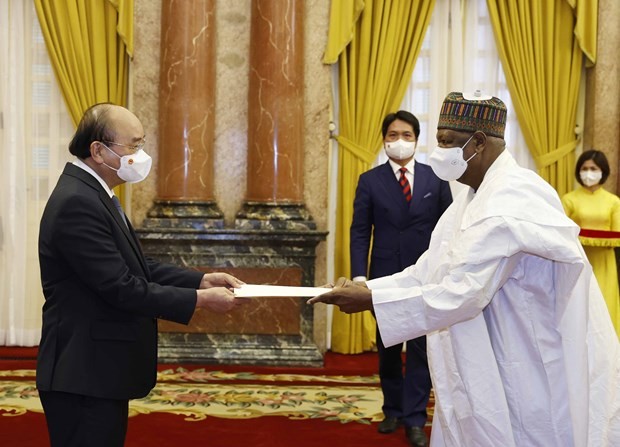 Nigerian Ambassador Hassan Adamu Mamaniu (R) presents his credentials to President Nguyen Xuan Phuc (Photo: VNA)
Meeting with Nigerian Ambassador Hassan Adamu Mamaniu, President Phuc expressed his hope that during the diplomat’s term, the two countries will coordinate closely to develop bilateral relations on par with their political resolve and cooperation potential and increase their annual trade to about US$1 billion.
The ambassador said he will exert every effort during his term so as to intensify the countries’ multifaceted cooperation, noting that Nigeria is ready to send a high-ranking delegation to Vietnam to reinforce ties. 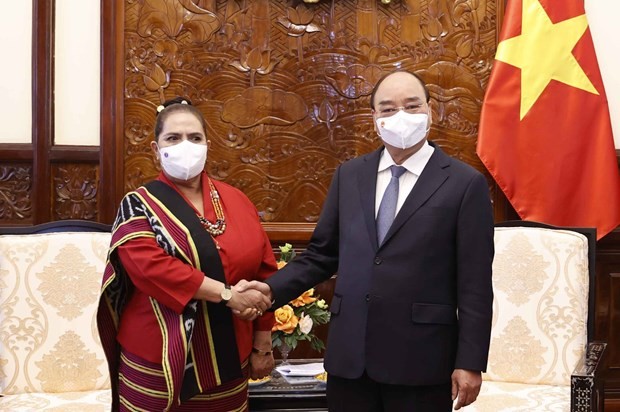 President Nguyen Xuan Phuc (R) and Timor-Leste Ambassador Olandina Isabel Caeiro Alves (Photo: VNA)
At the meeting with Ambassador of Timor-Leste Olandina Isabel Caeiro Alves, President Phuc affirmed that Vietnam wishes to work with Timor-Leste in promoting post-pandemic sustainable development and bilateral trade.
He held that both sides should carry out the Joint Committee for Bilateral Cooperation early as stated in the framework agreement on economic and technical cooperation signed in April 2010, and coordinate with one another to celebrate the 20th founding anniversary of their diplomatic relations next year.
The leader also asked the Timor-Leste Government to create favorable conditions for the telecom group Viettel to operate and encourage other Vietnamese firms to invest there.
The ambassador of Timor-Leste voiced her hope that she will receive assistance from relevant agencies in Vietnam, committing all-out efforts to contribute to the countries’ cooperation. 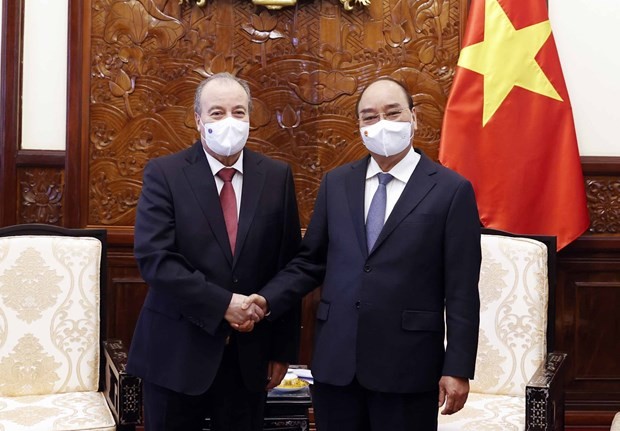 He asked Boubazine to help implement existing cooperation mechanisms such as the Inter-Governmental Committee and the political consultation between the two foreign ministries. He also called on the two countries to continue coordination and mutual support at multilateral forums, especially the United Nations and the Non-Aligned Movement, and step up trade and investment partnerships.
For his part, the Algerian ambassador noted the countries’ Joint Committee will convene a meeting to consolidate the legal basis for bilateral cooperation, adding that his embassy will organize an Algerian culture week in Vietnam and many other activities so as to help deepen mutual understanding on the occasion of the 60th founding anniversary of their diplomatic relations.