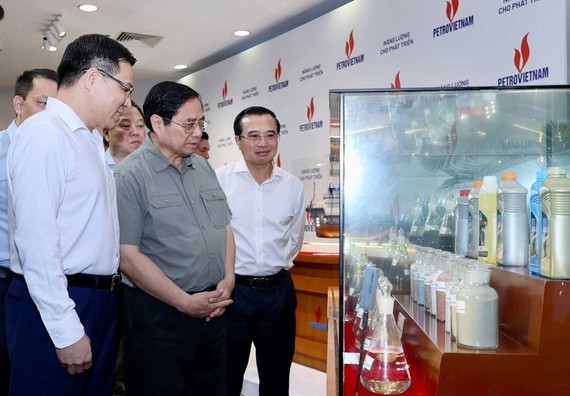 In 2021, PetroVietnam contributed VND112.5 trillion (US$nearly 4.8 billion) to the State budget, up 80 percent from the year’s target and 36 percent from 2020. The contribution stood at VND90.6 trillion in the first eight months of 2022, up 40 percent from this year’s target and 45 percent from last year.
Production and business activities remain stable, with the exploited crude oil volume 23 percent higher than the eight-month plan and equivalent to 84 percent of this year’s target, Hung noted.
He also pointing out certain difficulties and obstacles to the group and proposed several solutions to the Government and the PM.
Applauding efforts by oil and gas workers, PM Chinh said PetroVietnam has to harmoniously, reasonably, and effectively combine economic development with security - defense and social order and safety safeguarding; stability with reform; fast development with sustainability; and research, exploration, exploitation with processing and production of petrol, oil, chemicals, fibre, and yarn.
He underlined that the group must guarantee the sufficiency of energy, especially petrol and oil, for national development and defense while contributing to national industrialization and modernization, the formation of an independent and self-reliant economy, technological reform, digital transformation, energy and green transition, supply chain diversification, and social security ensuring.
The Government leader asked PetroVietnam to pay due attention to the Party and apparatus building; continually improve its corporate governance; restructure production and business activities to match the current context; combine petroleum exploration and exploitation with the protection of national interests, independence, and sovereignty at sea; and produce equipment for the oil and gas industry.
It also needs to stay proactive in international cooperation, the PM said, pledging that the Government always stands side by side with the group to support its development.