Delivering an opening speech at the conference hosted in Tay Ninh Province, PM Nguyen Xuan Phuc said that amid the world economic recession, Vietnam posted an economic growth rate of about 4 percent in the first quarter of 2020 and the situation got better in May with a decrease in unemployment number. 2020 is a year when the agricultural field enjoys bumper crop and good price and Vietnam is expected to lead the world in rice export.

The southern key economic zone plays an important role, accounting for 43 percent of Gross Domestic Product (GDP) and 42 percent of the country’s budget revenue so the Prime Minister proposed localities in the zone, scientists and businesses to contribute opinions for the PM, his deputies and ministries to give right decisions to fuel economic development.
Stating at the conference, chairman of HCMC People’s Committee Nguyen Thanh Phong informed that the Covid-19 pandemic has left a profound and comprehensive impact on all aspects of the city’s socioeconomic field in the first months of 2020. Gross Regional Domestic Product (GRDP) growth rate was only 1.03 percent. Budget revenue was estimated to reach VND139 trillion (US$5.96 billion) in the first five months, accounting for 34.3 percent of estimates and reducing 16 percent over the same period last year. Total retail sales of goods, industrial production index, foreign direct investment attraction all reduced. The number of businesses stopping operation or dissolving strongly increased compared to the same period last year.
Amid that context, the city still obtained bright points in socioeconomic development. Despite reduction, budget revenue made up 25 percent GRDP and contributed 25 percent to the country’s budget revenue. Public investment hit VND17 trillion ($729.15 million), meeting 40.4 percent of the assigned capital plan in 2020. Goods export turnover touched US$16.9 billion, up 6.3 percent year on year. Two out of four major industries posted decent growth rate, specifically chemical-rubber-plastics grew 8.3 percent.
From now until the end of 2020, the city will focus on five groups of solutions to support businesses. The first one will maintain production and trading preventing businesses from going bankruptcy, the second will give financial assistance to production and trading companies, encourage production to replace import of goods. The third will continue giving support to technology renewal for production and trading and speed up digitalization in business management and industry management. The next one will continue carrying out innovative startup programs. The last group of solutions will provide timely forecasts and coordinate with competent agencies in nations which are trade, investment and tourism partners of Vietnam to open economic and tourist activities to each nation at the right time.
Coordinating regional economic development connectivity, the city will take the initiative in working with other localities to implement Directive 19 and Conclusion 289 of the Prime Minister about solutions to speed up growth and sustainable development in the southern key economic zone.
Priority to traffic infrastructure connectivity 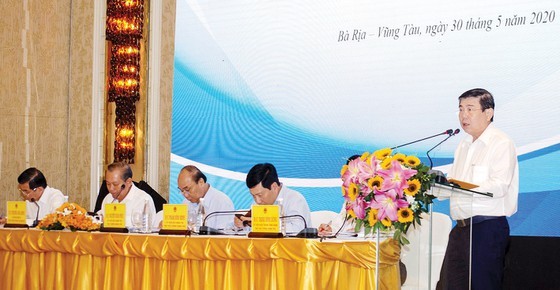 Chairman of HCMC People’s Committee Nguyen Thanh Phong makes a statement at the conference
After listening the statement by HCMC Chairman Nguyen Thanh Phong, the Prime Minister required the city to repair limitations and weaknesses which have been addressed for the last past, boost the city’s internal force, closely connect with other provinces and cities in the Southern region to further promote HCMC’s large potentials in science and technology, resource of leading experts and consumption market.

Other provinces in the southern key economic zone proposed the central Government to give priority to planning and investment of infrastructure works for regional connectivity especially expressways, development of industrial parks to prevent scattered investment with localities doing that on their own. In addition, they proposed the Government to consider budget assistance for infrastructure investment and socioeconomic development.
Sharing the same view, leaders of some agencies and ministries said that the southern key economic zone with HCMC in the center plays a very important role to the national economy. Still the region’s development has showed signs of slowdown due to asynchronous traffic infrastructure, regional connectivity which is not high, no specific mechanisms for development. So the zone is in dire need of the central Government’s support to clear difficulties and develop vigorously.
Concluding the conference, Prime Minister Nguyen Xuan Phuc appreciated and commended the Party committee, government and residents of the eight provinces and city in the southern key economic zone for their efforts and achievements in Covid-19 combat. He noted that the pandemic has not been over so they should not be subjective and take more drastic actions than before in the fight against the pandemic.
He stressed that the southern key economic zone is the major one of key areas in the country. With its scale and contribution, the region is expected to become a metropolitan area of the Southeast Asian region in the near future, so reform and strong creativeness are needed for the zone’s development.
The PM revealed that a specific mechanism will be built for the southern key economic zone including policies to stimulate its operation mechanism.
He assigned the Ministry of Planning and Investment to study an investment support package for localities in the area to invest in traffic connectivity, change and supplement industrial park plans to lure and receive waves of foreign investment. The State Bank of Vietnam has been tasked to propose solutions for credit institutions to attend traffic investment projects under Public Private Partnership (PPP) model. The Natural Resources and Environment Ministry has been asked to study and adjust land use plan to make room for urban areas and industrial parks. The Ministry of Transport has been required to establish traffic projects to connect industrial parks, ports and yards, logistics facilities in the area to create a development motivation.
On the same day, the PM inspected the areas of Cai Mep-Thi Vai seaport complex, Phuoc An Bridge investment project, Cai Mep Ha logistics center project, Korean Hyosung Company’s $1.35 billion project.