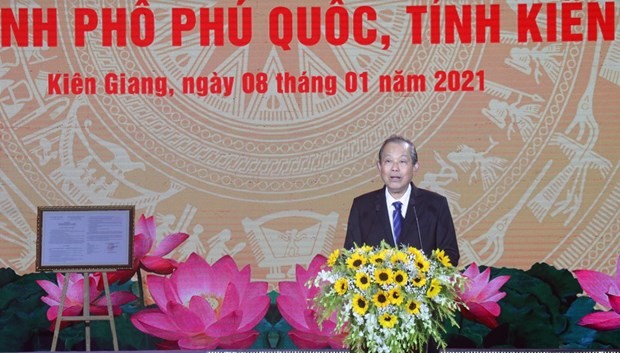 Deputy PM Truong Hoa Binh speaks at the event. (Photo: VNA)
Speaking at a ceremony held on January 8 to announce the establishment of Phu Quoc city, Deputy Prime Minister Truong Hoa Binh said Phu Quoc has experienced tremendous economic and social growth and urbanisation, especially in recent years.
The establishment of Phu Quoc city will play an important role in the province’s socio-economic development and in asserting the country’s sovereignty over its waters and islands.
The island has an international airport, which opened in 2012. International airlines operate both commercial and charter flights to the island.
The Government has identified Phu Quoc as one of the destinations in the country that will help revive international tourism after the COVID-19 pandemic is contained, according to Binh.
Blessed with white sand, turquoise beaches and balmy weather nearly year-round, with two-thirds of the island covered in tropical forests, Phu Quoc is a tourism paradise.
It is the largest island in the country at 590,000sq.km, almost the same size as the city-state Singapore, and is known for white-sand beaches and resorts, mostly located along its palm-lined southwestern coast.
The Phu Quoc National Park, with mountains, dense tropical jungle, hiking trails and wildlife, covers more than half of the island.
Apart from the natural beauty, tourists are also attracted by the island’s luxury resorts, golf courses, animal safari, and casinos, according to Binh.
The island is geographically close to other parts of Southeast Asia and near several international freight routes, and can be reached in less than two hours by air from major cities in the region.
However, the island faces challenges related to pollution, surging land prices, and a growing population, as well as education and healthcare quality, and safety and security issues, according to Binh.
“Becoming a city will enable Phu Quoc to address these problems,” he said.
Binh urged the city to give priority to environmentally-friendly projects with a focus on coastal and riverine areas, and public green spaces, to improve the quality of life.
The National Assembly Standing Committee in December approved a resolution to officially establish Phu Quoc city. The population will be nearly 180,000 living in two wards - Duong Dong and An Thoi, with seven communes - Ham Ninh, Duong To, Ganh Dau, Bai Thom, Cua Duong, Cua Can, and Tho Chau.
Duong Dong town will become Duong Dong ward, but its area and population will remain unchanged. An Thoi ward will be created by merging Hon Thom commune and An Thoi town.
Phu Quoc city will have its own People’s Court and Supreme People’s Court.
Kien Giang province has submitted a master plan for Phu Quoc until 2040 to the Government for approval.
The plan focuses on an infrastructure system linked with the Mekong Delta and the rest of the country, as well as sustainable development, environmental protection, improved security, and cultural development.
The plan also seeks harmonisation of economic growth with conservation of historical and cultural relics.
Under the plan, a Phu Quoc Economic Zone would be created as a hub for trade, tourism, politics, culture, and science and technology.
Phu Quoc has more than 700 accommodation establishments with more than 20,000 rooms. With about 12,000 five-star hotel rooms, it aims to become a leading resort tourism city in Southeast Asia.
Lam Minh Thanh, Chairman of Kien Giang Province’s People's Committee, said that Phu Quoc had identified tourism as a spearhead for long-term development, according to the plan approved by the Government.
Incentives have been offered to investors to help it achieve its full potential.
The island has some of the best incentives in the country, according to Thanh. Corporate and personal income taxes are the lowest in the country, and land rents for investors are waived for the first four years and reduced by 50 percent for the next nine years.
Phu Quoc is also set to become one of the country’s three special economic administrative zones, along with Van Don in the northern province of Quang Ninh and Bac Van Phong in the south-central province of Khanh Hoa.
The island's incentives have already attracted huge investments from both local and international firms. There are more than 320 investment projects worth 16 billion USD, according to the Kien Giang Provincial People’s Committee.
In 2019, Phu Quoc welcomed more than 5 million visitors, up 30 percent from 2018, including 541,600 foreigners.
In 2020, due to the impact of the pandemic, total visitors were estimated at 1.39 million, reaching only 46.3 percent of the province’s target.