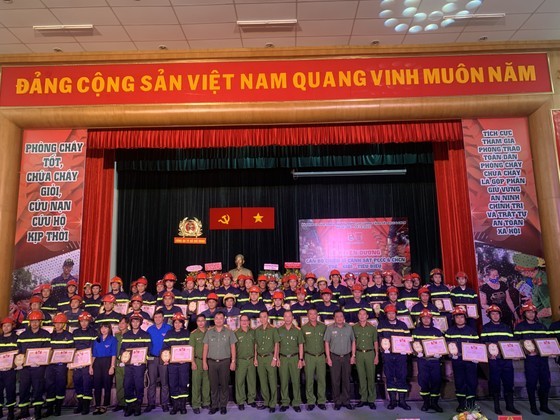 At the ceremony
At the ceremony, the leaders of the PC07 granted certificates of merit to 61 young, outstanding and typical fire and rescue police forces of the division, soldiers of wards and Thu Duc City who had highlighted achievements in fire prevention and fighting and rescuing people.
Speaking at the ceremony, Colonel Huynh Quang Tam, Head of Fire Prevention and Fighting and Rescue Police Division informed that the unit had strived to reduce the number of fire cases over 2021 based on four criteria including the number of fire cases, the number of huge fire case, fire case causing severe damage on people and properties.

From the beginning of the year, the number of fire cases has been reduced by nine ones over the same period last year. Besides, the number of death and injuries has gone down to 20 and 20 respectively.

Particularly, the unit has saved 101 residents, protected hundreds of residential houses, dozen thousands of square meters of factories, warehouses of enterprises, companies and people which would contribute to stabilizing the security and order, successfully implementing the missions of socio-economy development of the city.