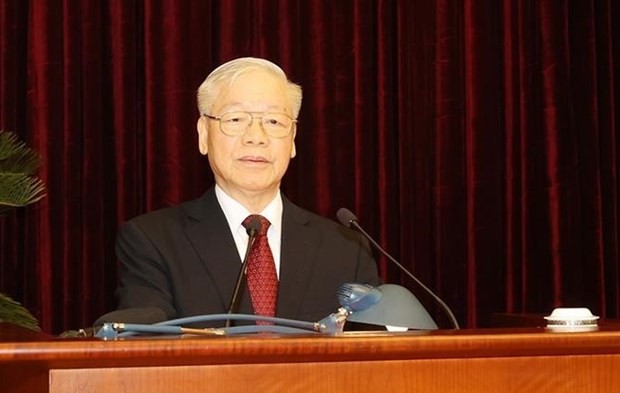 Party General Secretary Nguyen Phu Trong speaks at event. (Photo: VNA)
He made the remarks when addressing the opening of the sixth plenum of the 13th Party Central Committee on October 3. The Party leader said this plenum aims to scrutinize the study and implementation of key major contents and issues in the Resolution of the 13th National Party Congress.
Regarding the socio-economic and State budget performance in 2022, General Secretary Trong said fast, complicated and unprecedented changes in the world have negatively affected economic recovery and development in Vietnam.
He asked the Party Central Committee to analyze the outstanding features of the year 2022, clarify existing shortcomings and weaknesses as well as difficulties and obstacles, and pinpointed their causes with a view to defining guiding viewpoints, targets and tasks and solutions for 2023.
As the plenum will consider and give opinions on the orientations of the national master plan for 2021-2030 with a vision to 2050, the Party General Secretary affirmed that this is a new and difficult task. He urged the Party Central Committee to engage in an in-depth discussion of the proposal submitted by the Party committee of the Government, thus contributing practically to the building, issuing and implementing the national master plan. 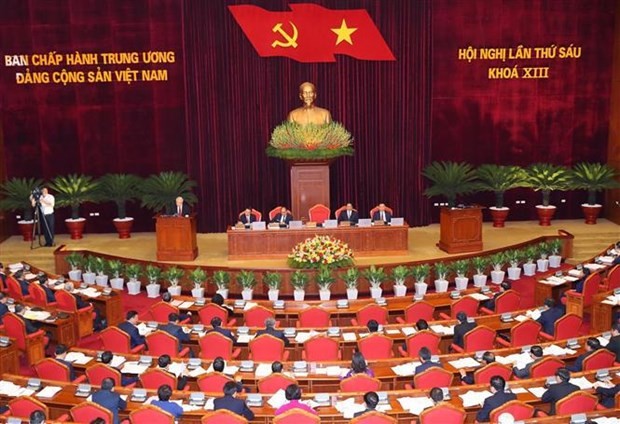 At the event (Photo: VNA)
Other issues on the plenum’s agenda are the assessment of the implementation of the policy on national industrialization and modernization, and the progress of the building and perfection of a law-governed socialist state.
The Party chief also underlined the importance of a report reviewing 15 years implementing the resolution of the fifth plenum of the 10th Party Central Committee on continuing renewing the Party leadership over the political system, which is submitted to this plenum.
He said this is an important content of the task on building a clean and strong Party and political system. He required that during the discussion of the report, attention should be paid to seeking new breakthroughs but feasible solutions to meet the development requirements in the new stage.