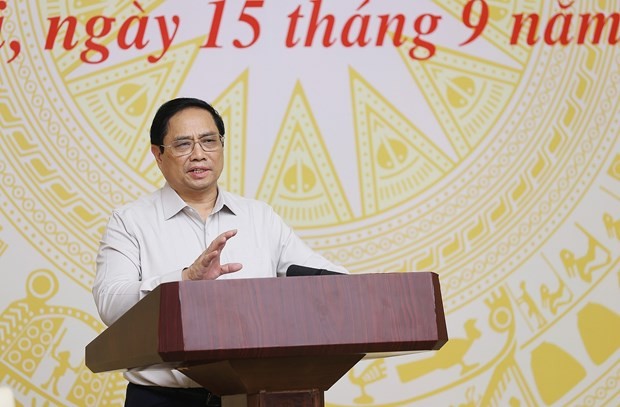 Prime Minister Pham Minh Chinh addresses the national teleconference on September 15. (Photo: VNA)
The leader said the meeting is part of the efforts to assist people and enterprises in difficulties so as to achieve the common target of stabilizing the macro-economy, controlling inflation, boosting economic growth, guaranteeing major balances, and ensuring people’s material and spiritual life.
He highlighted the Party and State always view administrative reforms as an important step to build and complete a clean, strong, efficient, and effective law-governed socialist state for the people and national development.
Besides, governance modernization is critical to building a digital Government, economy, and society. This task requires reformed awareness, mindset, and action of the entire political system and society, he went on.
Vietnam has made important strides in administrative reforms, especially in terms of administrative procedures, and improvement of all-level administrations’ governance, but shortcomings still exist and need to be addressed quickly for the optimization of every resource for recovery and development, the PM said.
Minister - Chairman of the Government Office Tran Van Son reported that since 2021, 1,758 business regulations in 143 legal documents have been scrapped or simplified. The PM has also approved plans to remove or streamline 1,107 regulations of nine ministries and agencies. 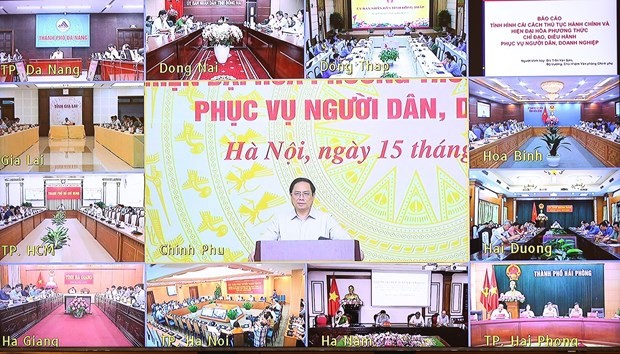 The national teleconference takes place on September 15. (Photo: VNA)
The portal for consulting and searching for business regulations has been updated with 17,687 existing rules, 352 others set to be issued, and plans to remove or simplify 1,029 business regulations to seek feedback from associations, enterprises and people, and also to monitor the implementation of reforms.

The PM has also approved a plan on the decentralization of power in dealing with 699 of the 5,187 administrative procedures in the over 100 areas, equivalent to 13.47 percent, helping shorten the time needed to solve those procedures, improve civil servants’ performance and reduce costs for people and enterprises, Son said.
Besides, about 11,700 single-window divisions at different levels have been set up nationwide to handle administrative procedures.
Regarding governance modernization, important platforms and information systems of an e-Government are being operated and developed, helping to strongly reform the working methodology and boost digital transformation at State administrative agencies, he added.
However, the leader admitted that there remain many problems and shortcomings in administrative procedure reforms, including those related to land, finance, public investment, home affairs, labour, health care, education, and import-export activities.
He also pointed out a lack of attention to online administrative procedures and sluggish digital transformation at some ministries, sectors, and localities.