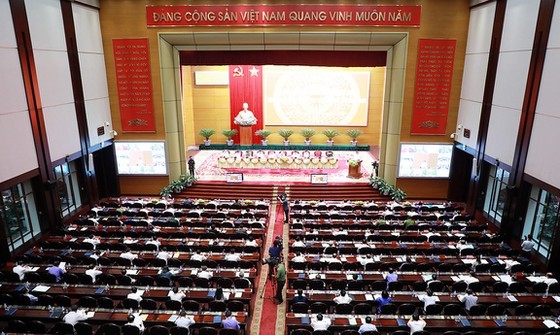 At the meeting (Photo: SGGP)
The conference, which is held in both in-person and online forms, was also attended by Politburo members: President Nguyen Xuan Phuc, Prime Minister Pham Minh Chinh, National Assembly Chairman Vuong Dinh Hue and Permanent member of the Party Central Committee's Secretariat Vo Van Thuong.
This is the first national conference of all agencies in charge of internal affairs held after the first session of the 15th National Assembly and the first session of the Government in the new tenure.
Participants agreed that agencies have shown strong performance in giving strategic advice and proposals to the Party and State on major policies regarding internal affairs as well as anti-corruption and judicial reform matters. 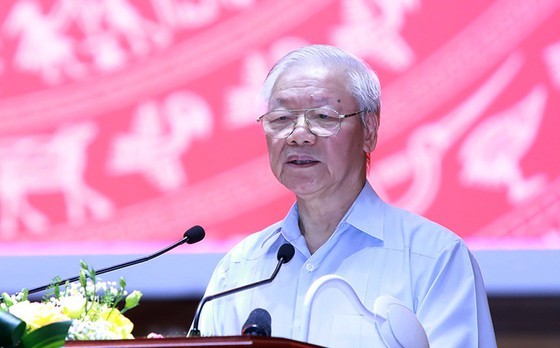 Party General Secretary Nguyen Phu Trong speaks at the event. (Photo: SGGP)
The agencies have also played a core role in ensuring the country’s independence, sovereignty, unification and territorial integrity as well as political security, social order and safety as well as peaceful life of the people, creating a peaceful, stable, secured and safe environment for national development.
They have also actively worked to detect and settle corruption cases and negative phenomena in a strict and timely manner, contributing to realising and affirming the Party and State’s determination and efforts to combat corruption with the motto of not allowing any “restricted areas and exceptions”.
The conference is of significance, manifesting the close and smooth coordination and the involvement of the whole political system, the consensus and high determination of the whole Party, people and military in implementing the Resolution of the 13th National Party Congress.
Party General Secretary Nguyen Phu Trong is going to deliver an important speech at the conference.