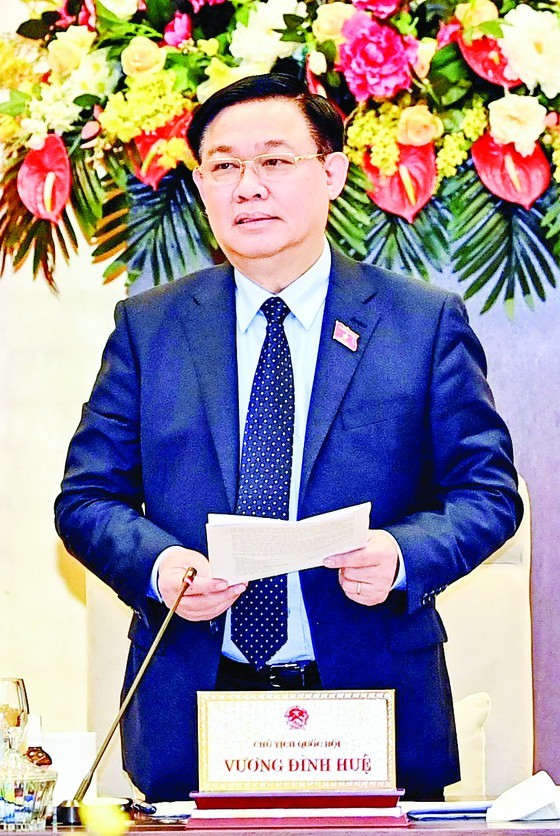 National Assembly Chairman Vuong Dinh Hue expresses his dissatisfaction with slow disbursement
Speaking at the session, National Assembly Vice Chairman Nguyen Khac Dinh said that the meeting was successful in all aspects. The meeting resolution was prepared very quickly, but still full of necessary issues; therefore, voters and residents advocated it.
Agencies of the National Assembly and National Assembly deputies must regularly supervise to make these policies that the National Assembly has decided come to life. Standing Vice Chairman of the National Assembly Tran Thanh Man highly appreciated National Assembly agencies and media agencies’ responsible behavior at work.
According to the Government report presented by Deputy Minister of Planning and Investment Tran Quoc Phuong, more than VND1,000,000 billion is allocated for medium-term public investment capital from the central budget while VND639,061 billion is the remaining capital of the public investment plan medium-term period 2021-2025.
Of the total amount, VND242,075 billion will be allocated to 565 new construction projects, the rest has not yet allocated detailed capital.
The Ministry of National Defense, the Ministry of Agriculture and Rural Development, and five provinces including Tien Giang, Khanh Hoa, Thai Binh, Dong Thap, Thanh Hoa proposed to replace 14 existing projects which are in the investment list but do not have enough investment procedures. They are proposed to be replaced with 10 projects which have not been reported to the National Assembly but have completed investment procedures with investment capital of over VND 2,883 billion.
National Assembly Chairman Vuong Dinh Hue expressed his dissatisfaction with slow disbursement due to poor investment preparation. He laid particular stress on changes in the organization and implementation as well as in supervision of projects.
The Government shall report more clearly on several unfinished projects to avoid dispersion and fragmentation but ensure the principle of flexible harmonization between the two medium-term public investment packages and the monetary and fiscal package.
All members of the Standing Committee of the National Assembly voted to agree with the Government on the policy of supplementing the medium-term public investment plan with foreign capital for the period 2021-2025 from the unallocated capital of VND8,208 billion for 49 projects.
Furthermore, VND88,099 billion will be given to 340 projects that have completed investment procedures as prescribed for the 2021-2025 period. Responsible agencies must reasonably adjust capital between projects to enhance the efficiency of investment resource use.
The Government should continue to direct ministries, central agencies and localities to urgently complete project investment procedures to report to the Standing Committee of the National Assembly for opinions on allocating the remaining capital of VND 542,753 billion in accordance with regulations. Relevant agencies ought to closely coordinate for key projects linking regions and capital absorption to accelerate implementation, disbursement for social-economic development.