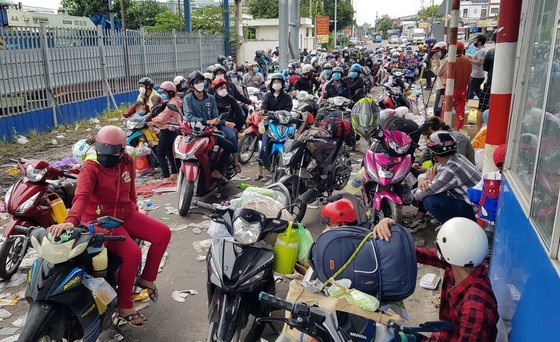 Returnees on motorbikes gather at a Covid-19 checkpoint
Face-to-face and virtual job fairs for workers who have fled Ho Chi Minh City and such southern industrial provinces as Dong Nai and Binh Duong after months being stranded by strict movement curbs will be held at the headquarters of the Employment Service Centers of 15 provinces and cities from 8 a.m. to 12 p.m. on October 29.

This is an activity initiated by the Employment Service Center of Can Tho City aiming to solve the post-Covid-19 employment problem; especially received tens of thousands of workers returning to their hometowns in Mekong Delta due to the impact of the Covid-19 epidemic.
Vo Thanh Quang, Director of the Department of Labor, Invalids and Social Affairs of Soc Trang province, said that the province has so far received nearly 50,000 returnees from the southern metropolis and Binh Duong Province meanwhile enterprises in the province just need about 3,000 workers.
According to the Department of Employment under the Ministry of Labor, Invalids and Social Affairs), it is expected that 60-70 percent of workers returning to their hometowns to return to work in HCMC which will create a big paradox in terms of labor supply and demand.
Large cities, where many industrial and export processing zones are located, will be likely to face a labor shortage when they resume post-Covid-19 when the epidemic is under control, while some rural areas will see a surplus of worker force.
Accordingly, it is necessary to hold job fairs to connect enterprises and laborers for a balance in labor demand and supply in a perfectly competitive market
Earlier, speaking at a meeting with Soc Trang province, Chairman of Ho Chi Minh City People's Committee Phan Van Mai said that the southern City will create favorable conditions for people who are from all corners of the country, including people in the Mekong Delta, back to work.
At the same time, Ho Chi Minh City has also worked with business associations on a plan for direct labor recruitment as well as a plan to bring migrant workers back to work.