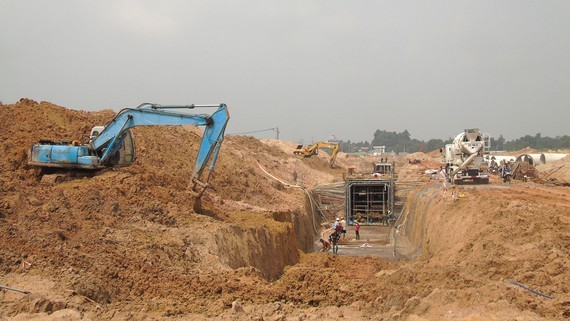 Investigations show that there are signs of land sellers and buyers agreeing to fake earlier transaction dates to receive more land clearance compensation.

A land investor in Bien Hoa City of Dong Nai Province informed that he was marketed a lot of over 1ha in Binh Son Commune, along with 2 resettlement lots, with the price of VND2 billion ($88,000). If agreeing with the deal, the two parties enter a handwritten contract with an earlier transaction date (before the National Assembly approved investment into Long Thanh International Airport project and July 1, 2014 when the 2013 Land Law was in effect). If all go well, this investor will receive VND4 billion ($176,000) of compensation.

This action is not at all uncommon for land transactions in the neighborhood near Long Thanh International Airport project, creating more difficulties for land clearance tasks here.

As scheduled, Long Thanh District of Dong Nai Province has to erase a whole commune named Suoi Trau and certain hamlets in the communes of Cam Duong, Long An, and Long Phuoc. Due to heavy workload, it is challenging for state officials to verify the precision of informal handwritten land contracts such as corrected details in a contract, one lot sold several times to several buyers all via handwritten contracts, and even disputed land. This has made land compensation an extremely difficult task.

Dong Nai Province People’s Committee reported that until November 10, 2021, Long Thanh District approved requests of over 4,400 land compensation cases, 3,600 of which successfully received their money. The rest are waiting for further investigation and verification.

Vice Chairman of Binh Son Commune People’s Committee Hoang Huu Minh stated that the most troublesome task is to track back the origin of handwritten land contracts since the land use right in these cases is not certified by authorized agencies.

To accelerate the progress, Binh Son Commune People’s Committee has to post land recovery notices on its bulletin board. Within 15 days, if land owners do not come to complete necessary procedures, the localities will retrieve the lot and store the corresponding compensation in the local state treasury.

To identify land owners precisely, the functional agencies have to collect ideas from the neighborhood and people working on that lot, followed by a comparison with details saved at the Center for Land Development Resource of Long Thanh District.

In reality, only around half of the land is approved for compensation (57ha out of 104ha along the DA boundary and 342ha out of 722ha in the land reserve area).

As informed by Chairman of Long Thanh District People’s Committee Le Van Tiep, when the airport construction project was approved by the National Assembly in 2015, all land transactions were instructed to temporarily halt. However, information land purchases via handwritten contracts have still continued. Therefore, the district is working with the task force assigned to handle problems related to this project in order to address any arisen land issues and arrange resettlements for citizens.

Matters beyond power will be sent to Dong Nai Province People’s Committee before being submitted to the central agencies for further direction.

In the recent virtual meeting about the land clearance task for Long Thanh International Airport construction project, Deputy Prime Minister Le Van Thanh asked that Dong Nai Province People’s Committee be responsible for completing this important task in the first quarter next year and prepare a report for the Government.

He stressed that since this building project is critical in traffic infrastructure development for the southern region and the whole country in general, it has attracted much attention of all people nationwide. Hence, it is necessary to ensure the schedule of all stages so that the project can be finished in 2025.