HCMC has been conducting many campaigns to raise funds for poor people over a period of 20 years. Fund for the poor has received more than VND2,329 billion (US$100,305 milion) from individuals, enterprises and local and foreign organizations.

On the morning of October 8, the Vietnam Fatherland Front Committee of Ho Chi Minh City launched campaigns in response to the peak month of taking care of the poor. At the ceremony, authorities presented financial assistance for building houses and sponsoring outstanding local poor students in Ho Chi Minh City.
So far, around 30,208 and 17,327 houses have been built and repaired respectively. Additionally, more than 500,000 Nguyen Huu Tho scholarships have been given to good students from the low-income families. Moreover, 11,020 vehicles, more than 2,000 stalls, and millions of gifts for the poor and near-poor households.
As a result, it has made practical contributions to the implementation of two national target programs including the sustainable poverty alleviation program and the national target program on building new-style rural areas.
This year, the campaign also supported people badly affected by the Coronavirus pandemic and poverty-stricken residents; therefore, this action is an effective way to specifically implement the two goals of the government at the same time comprising of promoting socio-economic development and preventing the Covid-19 pandemic. 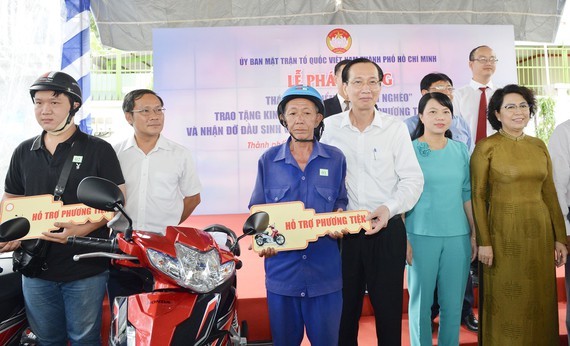 Deputy Chairman of the municipal People's Committee Le Thanh Liem presents a gift to a poor resident (Photo: SGGP)
In the peak month for taking care of the poor, the Vietnam Fatherland Front Committee of Ho Chi Minh City in coordination with Ho Chi Minh City Television Station organized the 20th musical program “ Thanh pho nghia tinh – Ket noi yeu thuong" (City of Love - Love Connection) program in 2020. The program was broadcast live at 7:30.p.m. on HTV1 and at 20:45 on HTV9 on October 21, 2020.