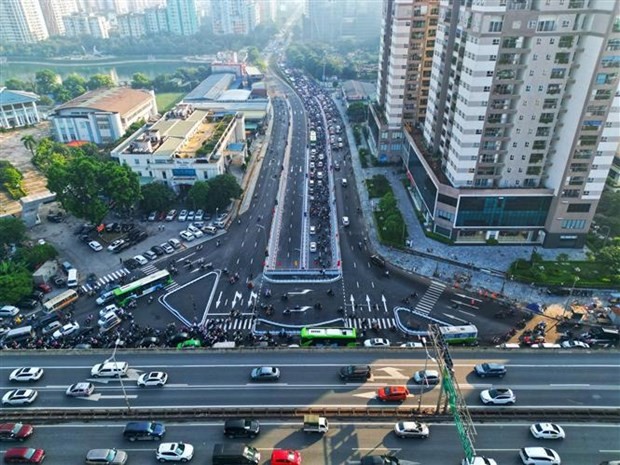 The Le Van Luong - Belt Road No. 3 tunnel is inaugurated on October 5 morning (Photo: VNA)
The 475m tunnel, the fourth of its kind in the city, is located at the intersection of Le Van Luong, Khuat Duy Tien and To Huu streets. It is one of the city’s key transport works.

With a total investment of nearly VND700 billion (US$29.3 million), construction on this tunnel started on October 2, 2020.

Doan Tuan, a resident in Hanoi, said that during the morning and afternoon rush hours, motorcyclists had to move little by little to go through this area. Especially on rainy days, people seems to have their feet buried under the downpour.

After this tunnel is open to traffic, the Hanoi People's Committee will start work on another connecting Kim Dong and Giai Phong streets in Hoang Mai district on October 10. The project has a total investment of nearly 600 billion VND sourced from the budget, and its construction will last until 2025.

Accordingly, the tunnel is designed to have 4 lanes and a total length of about 890m. Once operational, it is expected to help reduce traffic jams in the area near the capital city’s southern gate. 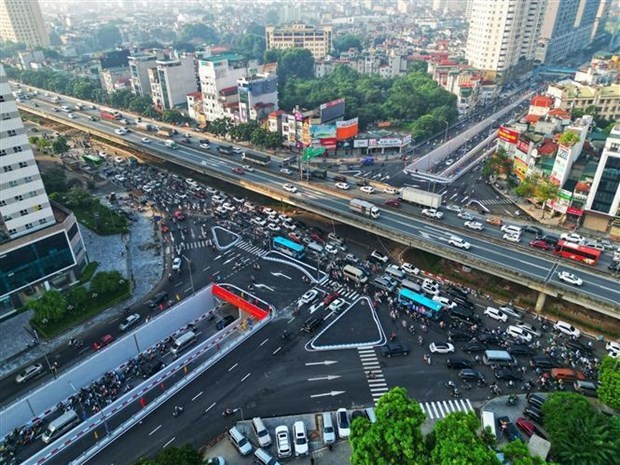 The tunnel is hoped to reduce traffic jam at the intersection, one of the worst in Hanoi (Photo: VNA)
The municipal Transport Department said traffic jams which last more than 30 minutes have been curbed, and the number of congestion hotspots during rush hour has decreased from 67 in 2013 to 32 at present.

According to the department, among a series of solutions applied to solve traffic jams, building and putting tunnels into operation in areas with heavy traffic and frequent congestion has proved effective.

The Kim Lien-Xa Dan tunnel was the first built in Hanoi, with a total capital of VND467 billion. The 140m tunnel, which was put into operation in 2009, has two lanes each side for both automobiles and motorbikes.

Recently, the Hanoi People's Committee also approved the feasibility study report of an investment project to build a road tunnel for both pedestrians and vehicles in Hoan Kiem district to improve traffic flow and ensure safety for pedestrians.

The Hoan Kiem People’s Committee is assigned to be the investor of the project, with a total capital of over VND100 billion ($4.28 million) sourced from the district’s budget. The construction is expected to last from 2022 to 2024.

The tunnel, set to be 3.2m high and 15.7m long, will connect Tran Nguyen Han and Chuong Duong Do streets.

Some other solutions taken by the municipal Department of Transport have been successful as well.

The other measure is to enhance the application of information technology in traffic control. The department has applied the GovOne software in management and maintenance of transport infrastructure and deployed the Iparking application at public transport parking spots in the city.

The city’s bus network is developing in both quality and number.

The Department of Transport said it will gradually implement the scheme to curb motorcycles while improving the infrastructure and service capacity of the public transport system.

It will promote a plan of expanding public transport network in the city, build a database on road infrastructure and means of transport, install camera systems and develop an online digital map for traffic management in urban areas.