An art performance at the ceremony (Photo: SGGP)
The event was co-organized by the Party Central Committee, the National Assembly, the State President, the Government, the Vietnam Fatherland Front Central Committee, and the provincial authorities.
Delivering a speech at the ceremony, Prime Minister Pham Minh Chinh recalled the life and career of the late PM, who was born on November 23, 1922, in Vung Liem district. Joining revolutionary activities at the age of 16, he moved on to hold many important positions in both the Party and Government.
He noted that at the 6th National Party Congress, Kiet's ideas and proposals regarding promoting agricultural production and goods production were included in the congress' document, contributing to formulating the Party's Doi Moi (renewal) policy, opening up a period of strong and stable development of the country. 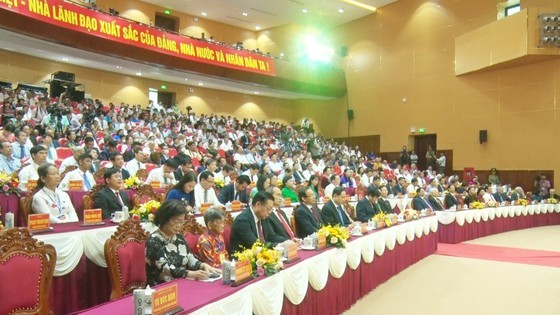 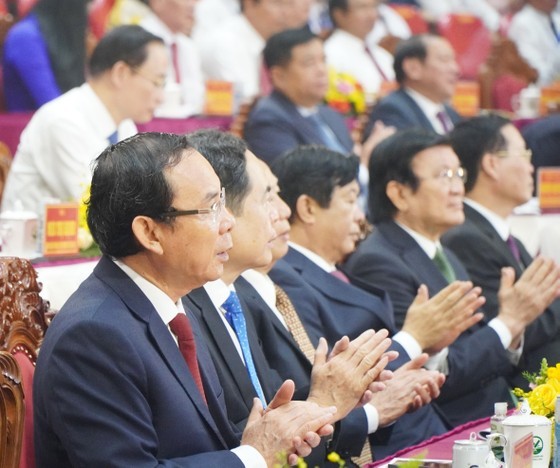 Secretary of the HCMC Party Committee Nguyen Van Nen (L) at the event. (Photo: SGGP)
During his time serving as Chairman of the Council of Ministers (now Prime Minister), he was the "general engineer" of many important projects of the country such as: Tri An, Thac Mo, Yaly hydroelectric power plants, 500 KV North - South super high voltage transmission line, Ho Chi Minh road, and Dung Quat oil refinery.
In the field of foreign relations, PM Kiet directly engaged in promoting the process of normalization of relations with China in 1991 and with the US in 1995, the accession to the Association of Southeast Asian Nations (ASEAN) in 1995. He also instructed the building of economic connections with regional countries and international organizations so as to tap into domestic and foreign resources, thus gradually taking the country out of crisis and breaking the blockade, to enter an era of integration and development. 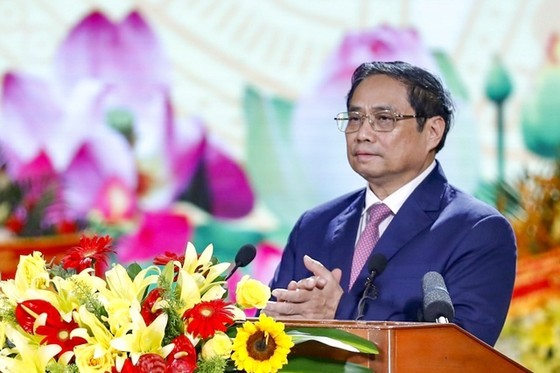 Prime Minister Pham Minh Chinh delivers a speech at the meeting. (Photo: VGP)
The Government leader also highlighted the proud accomplishments of the country over the more than 35 years of carrying out the Doi Moi cause.
As of 2022, the national economy scale has almost reached US$400 billion, average per capita income topped US$4,000 and foreign trade US$750 billion, putting Vietnam into the top 20 economies in terms of international trade.
Vietnam has established diplomatic relations with 190 countries and has been an active and responsible member of many international organizations. The country has signed 15 free trade agreements with over 60 countries and territories.
PM Chinh affirmed that PM Vo Van Kiet’s life and career are the embodiment of a loyal revolutionary and an excellent leader who dedicated his life to the country and the people.
With his democratic working style and determination to do and take responsibility, he had made an important contribution to the mobilization of people from all walks of life to implement the Doi Moi policy, the Government leader noted.
Paying respect to the late leader, PM Chinh called on Party members and people, particularly youth, to follow his example, promote great national unity, and strive to build a strong and prosperous nation of wealthy and happy people.

At the ceremony to inaugurate Cai Cam bridge. (Photo: SGGP)
Before the ceremony, PM Chinh attended the inauguration of Cai Cam bridge in Vinh Long city, whose construction began on October 30, 2020 as part of the 3.6km Vo Van Kiet road worth nearly VND1.5 trillion (US$60.37 million).
The operation of the road and the bridge is expected to connect the provincial administrative center with the city’s urban area and local districts’ administrative centers.